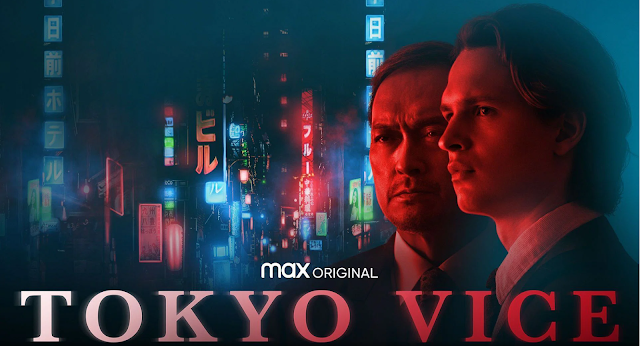 When I was thirteen years old, I visited Japan with my mother. My memories from that time period are still quite clear, and I remember that she would always point out people who had tattoos and say, "We shouldn't go into that restaurant. It is frequented by the Yakuza." I really didn't know what she meant other than they were "bad people" or "People to be avoided." Even though she had married an American from Texas, my mother's ability to navigate the shinkansen (the Japanese bullet train) and go from city to city in Japan with ease always impressed upon me that she had come to power within big cities. Tokyo was the biggest city I'd ever been in at the time, and I remember that the streets were narrow, everything was very crowded, and the heat was as oppressive as a sweater with very little relief due to an astounding amount of humidity.

With that in mind, it has been a delightful experience to watch Tokyo Vice on HBO Max, because (for one) it answers exactly what there was to be feared when thinking of the Yakuza. Coming away from this show, if I had to describe the Yakuza, I would say its similar to the western Mafia, only with an injection of an ancient Japanese cultural obsession with honor and duty to one's organization. The setting is in the nineties, so well past the time when I visited Japan in the early eighties. Some of the story concerns itself with Kabukicho, which was considered an entertainment and red-light district in the heart of Tokyo that had/has such things as "Love Hotels" which are not really found so openly in America. The story itself is based on a memoir written by Jake Adelstein, who wrote about his experiences covering Japanese gangsters when he was covering crime for The Yomiuri Shimbun from 1993 to 2005.

I've not read the book, but it isn't difficult to get details off the internet about it. The most important takeaway from the memoir is that it talks about Adelstein's expose that was published in Japan abaout Tadamasa Goto, the head of the yakuza family Goto-gumi who was known as the "John Gotti" of Japan. He sold out his gang to the F.B.I. in order to jump the queue and get a liver transplant in the United States, ahead of U.S. citizens. And of course, Adelstein got death threats because of this. I'm sure it was a very scary time, and it shows the kind of courage it took to be a journalist rubbing elbows with everyday criminals who very much could just do what they wanted to in Japan.

Tokyo Vice is a show that is richly detailed. The main character played by Ansel Elgort does a fine job speaking Japanese (there are lots of subtitles), and Ken Watanabe plays a high profile police detective that becomes friends with Ansel's character and begins to show him how the Japanese approach the Yakuza. This was a shocking thing for me to come to grips with, but the police in Japan approached gangsters very carefully. In one scene, Ken Watanabe tells a Yakuza that he has gone too far, and that he will need two people to take the fall for this. It's essentially asking him permission to arrest two people. But when the Yakuza refuses and gives only one, then Watanabe tells him that won't do. There's a lot of intimidation, and staring, and finally the Yakuza orders another of his men to be arrested to satisfy the police. I was like...what in the hell? This is NOT how it is done in America.

Additionally, people aren't "murdered" in Japan. Even when a corpse is found with a sword thrust all the way through him, it is not seen as murder. Instead they have copious euphemisms to beat around the bush on what exactly happened to this guy, and the local newspaper is forbidden to print anything except what the police say happened, which hides about half to three-quarters of the truth.

The crux of Tokyo Vice pivots around a thing that was happening in Japan at the time concerning lots of suicides, and this is what the reporter uncovers during the story. He finds out that a lot of financially distressed couples are going to shell companies offering loans of cash to people who cannot qualify for cash from any other institution. They are then forced to sign papers which turn over any life insurance or other kinds of insurance on them should they die before the loan is paid back. Then they issue tremendously high interest rates on the loans, take out an insurance policy on the individual in question, and when they inevitably default on the loan, they pressure that person continuously day and night to commit suicide or their family will suffer. When they commit suicide, sometimes in the most gruesome of ways (one person burns himself to death by soaking his body in gasoline and then lighting a match), the Yakuza collect on all the life insurance and make millions. When I realized what was going on I was like, "Oh wow...that is truly evil and diabolical." But...we only need to look at someplace like Ukraine and see what's going on there to realize that people, whether they are Japanese or Russian, can be the absolute worst.

Tokyo Vice is a thriller that does what it's supposed to do. It takes us (the viewer) through the bars, alleys, offices, shops, and homes of a Japan that existed before ubiquitous cell phones and internet blanketed our world. There's a kind of energy of exploration and discovery to that, which may be the best parts of good journalism. And aside from that, who doesn't like a good Japanese crime story?

Email ThisBlogThis!Share to TwitterShare to FacebookShare to Pinterest
Labels: Tokyo Vice, Tokyo Vice on HBO Max is a solid Japanese crime story based upon a famous memoir by Jake Adelstein