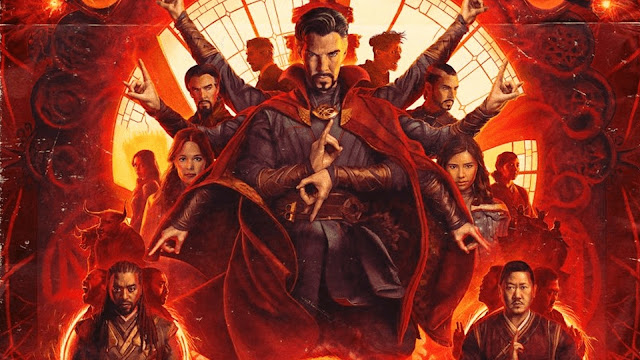 There are plenty of discussion threads and articles now on the internet that are talking about Doctor Strange in the Multiverse of Madness. In this blog post, I'm not so much going to talk about the movie, as I'm going to talk about incursions (which are a big part of the movie), and what they mean going forward for the Marvel Cinematic Universe. So here is your obligatory "spoiler alert."
So, the movie introduced the concept of incursions. You may be wondering, what exactly is an incursion? Although the film performs a decent explanation of this concept, the comics have additional insight. And most of this comes from Jonathan Hickman, who wrote a series for Marvel about a decade ago called Secret Wars. Jonathan Hickman, by the way, has been hired on as a consultant to Marvel (so we know that this is probably where the MCU is going post Thanos) and Jonathan Hickman is lauded by one of my close personal friends as being the greatest comic book writer ever. Take that as you would any other claim, but if not the G.O.A.T., then maybe we could agree that he would be on the small team photo of greatest writers of all time.
A multiversal incursion is an event where two universes crash into each other. There are also ways to prevent or stop an incursion, and to prevent two realities from collapsing on top of each other and thus destroying one or both universes involved in this event. The comic books by writer Jonathan Hickman say that incursions are the result of multiverse timelines contracting. Think of it this way: even though every universe has infinite outcomes built within it, each universe has the same fate in the grand scheme, i.e., a final death moment. In Jonathan Hickman's story, it was revealed that a character called Molecule Man destroyed a universe prematurely. In the Doctor Strange in the Multiverse of Madness, it is an organization called the Illuminati that informs Doctor Strange that another version of him did a similar thing and destroyed a universe prematurely. And the thing is, all of these universes are interconnected. So when one goes, it affects the ones it is linked to in unpredictable ways. There is also another rule to these incursions: when universes collide, Earth is the collision point in all instances. That makes Earth the center of the story. Follow me so far?
So how do you stop an incursion? Well that all depends on the writer. Instances that have popped up in the comics include destroying one Earth to save the other one. The Avengers once used the Infinity Gauntlet to force an approaching Earth away, although this destroyed multiple Infinity Stones. Now you may be asking: why would Disney and Marvel want to use this kind of plot tactic for forthcoming movies? Well...because it is exciting with lots of potential for some really huge special effects rich storytelling. And what is a Marvel superhero movie without special effects?
Having multiple universes collide also solves bringing in the X-Men and the Fantastic Four and Sony's Venom-verse, and every other thing that they've wanted to lasso into their huge story. It sets the stage for big heroes and just hugely powerful villains or entities (The Living Tribunal comes to mind who is...essentially...god). I mean...you get to destroy Earth in one example while still having Earth be saved in another. So you get all the fireworks of annihilating a planet without really harming the ability to tell future stories on the same planet. Weird, right? This is the absurdity and entertainment of comic book movies. Everything just keeps going on and on and on and it all makes sense because in the end, everything is possible with a multiverse and a multiverse incursion.
Anyway, I have no idea where they are going with any of this. I'm just reading the tea leaves, but I'm sure it may resemble something of Jonathan Hickman's storyline in Secret Wars. But there will be things cut out and changed. That shouldn't keep it from being entertaining, which is what counts in these kinds of things. It will also allow them to go bigger than the Thanos snap, which only affected one universe. In this kind of storytelling, many (more than one universe certainly) can and probably will be affected by devastating consequences. It's actually kind of exciting, once you think about it (and if you've been a fan of comic books). We are about to experience a studio going big in a way that has never been tried before, and either it will be great, or it will be ridiculous. I guess it's just a waiting game at this point.
Posted by Michael Offutt, Phantom Reader at 12:10 AM

Email ThisBlogThis!Share to TwitterShare to FacebookShare to Pinterest
Labels: comic books, Dr. Strange, Let's discuss Marvel Incursions which we learned about in Doctor Strange in the Multiverse of Madness, Marvel