The Orville is not more Trek than Trek. 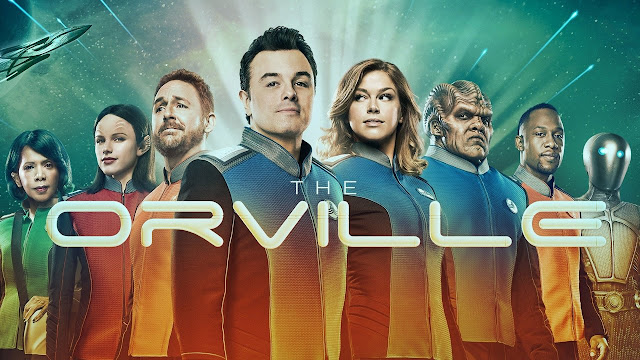 With the release of the third season of The Orville, the discussion among some people who love these kinds of shows (nerds like me) has often boiled down to: "It's good to have Star Trek back." The thing is...The Orville isn't Star Trek, and trolls like to use this line to bludgeon the legions of new fans who absolutely love the diversity and woke-ness of new Trek as if (in doing so) we don't know what proper Trek looks like or (for that matter) everything was better when women, minorities, and LGBTQ+ people were shunted into minor roles.

For me...The Orville always seemed like it was a kind of love letter to The Next Generation. This is similar to Michael Chabon's take, whose Picard series seems like an unnecessary addition to the story of Picard. Don't get me wrong...it's Trek so I watch it. But there's very little in the unfolding of the twilight years of Jean-Luc that feel like new ideas. There is no Species 10C like we got in Discovery. There are no strange new vistas that I haven't seen before. Instead, the majority of season 2 of Picard just spent its time in Earth's past in a deep dive into nostalgia and perhaps rewriting what the Borg were/are, which just seems unnecessary.

The Orville is also filled with a lot of ass-hattery and dick jokes. Even though I did think they were funny, dick jokes are not a sustainable thing you can do with a show for season after season. McFarlane clearly acknowledges this as they tapered off quite a bit in the first season and then became a more serious show when they introduced the Kaylon in season two who wanted nothing more than to wipe out all organic life. The mountains of skulls on their home planet were anything but funny (pure horror, folks).

The reason why The Orville could never be more Trek than Trek is because it relies too heavily on psuedo-nostalgia with everyone looking and talking and reminiscing about all the great things they never experienced during the world as we know it today. The haircuts, the slang, the worldview. You even get the 1980-2000-ish playlists, which seems like a crutch to draw in viewers who hate on anything new and different that takes a chance with its content. The far future should not always hark back to the distant past, and this type of thing is on the verge of becoming a science fiction cliché. Regarding the comedy aspect, it's not well-defined. The show goes from a dramatic futuristic show with awkward comedic aspects that oftentimes come across as half-hearted attempts sandwiched between serious situations. Some of it makes me cringe.

Where the show does tend to succeed is by using the exact copy of the playbook of ALL TREK: hope and human foibles. This takes its shape in watching humans struggle to answer questions to which there is no answer, and watching people do their best work together and to try and solve problems with the help of others. Along the way, they create unity, support, and communication. That message is something that we need now more than ever in our society, because it's a struggle out there. Y'all know what I'm talking about here.

I'm looking forward to watching The Orville season 3. However, it's not more Trek than Trek. If you are one of the people saying this, I wish you'd stop.

Email ThisBlogThis!Share to TwitterShare to FacebookShare to Pinterest
Labels: The Orville, The Orville is not more Trek than Trek