Outer Range on Amazon is as weird as it is uncompelling. 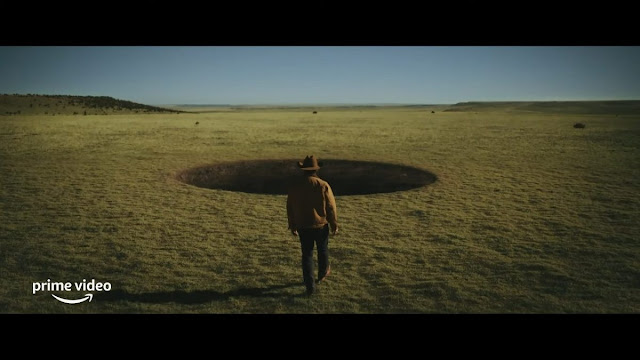 I recently watched Outer Range on Amazon with a friend. After we finished the final episode of the first season, both of us turned to each other and (essentially) said, "This show was weird. I feel like it wasn't really all that compelling. And it was a lot like 'Dark' but without the stunningly beautiful male characters that show had." That being said...it was all right if you like David Lynch-ish shows that have very few answers, and if you like westerns and cowboys.

When I first heard about this show, I don't really know what I was hoping for. The catch was compelling: a mysterious hole that is apparently bottomless and supernatural in origin appears in the west pasture of Royal Abbott's sprawling ranch of thousands of acres. As the show unfolds, we find out that Royal knew what this hole was. In fact, he's a man that is hundreds of years old, as he threw himself into it when he was about ten years old (and the year was like 1886 or something like that). It's a hole that goes through time with no apparent rhyme or reason as to how it works other than 1) things can come from any era and 2) it grants visions of what might be if you interact with the rocks that form its "substance" and get that on your skin.

I wanted to like the Abbotts, who were the stars of the show. But they were killers, and most of them were just not anyone I'd really care to associate with. By the end of this show, I was only kinda/sorta rooting for acting Sherriff Joy. And this series overall felt ponderous when it was trying to be atmospheric, clearly lacking the brilliance of someone who does this kind of show well: David Lynch. So it was like Twin Peaks without the charisma of those stars, if that makes any sense.

From the beginning episode I thought that Outer Range would have some kind of payoff. But when I finally understood most of what was going on, it felt like the big reveal wasn't satisfactory. All in all, I wouldn't recommend this show unless you are bored and just want something to watch that doesn't make a whole lot of sense and has sweeping Wyoming vistas and cattle ranchers. There is talk of a season two, but I don't know if I'd watch it. Sometimes, experimental science fiction shows just land flat, and this feels like one of those times.

Posted by Michael Offutt, Phantom Reader at 7:06 AM

Email ThisBlogThis!Share to TwitterShare to FacebookShare to Pinterest
Labels: Outer Range, Outer Range on Amazon is as weird as it is uncompelling