What is the story of Sir Gawain and the Green Knight about anyway? 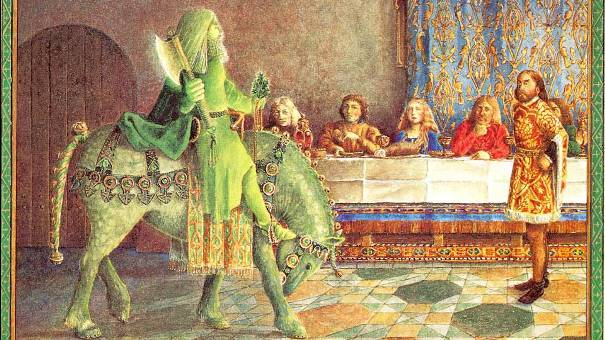 I read the story of  Sir Gawain and the Green Knight way back in my college days as an undergraduate in the English program at the University of Idaho. For what it's worth, I read it in Middle English, which (if you haven't done so) takes some time to look up all the words and process what they mean. It's not nearly as hard as Old English, which is essentially a foreign language. But English majors want to study English, right? I guess that means "to study the language in all its forms."

So what did I learn? Well, the Green Knight came for a game on Christmas, and as games go, it was "strike me in whatever way you want now, and in a year I get to do the same to you." Gawain does so, and the Green Knight does not die because magic saves his life. So, Gawain is honor bound to seek out the Green Knight to conclude their game in one year's time. When he does so, he comes across a castle where the Lord of the Castle's wife seduces Gawain over the course of multiple days. In the end, it was all a trick arranged by Morgan Le Fay to test King Arthur's knights and notably, to test Gawain who was known to be the purest of them (Gawain is caught with the Lady's green girdle if I remember correctly). Oh, and the Lord of the Castle was the Green Knight.

The interesting stuff unfolds as follows:

The Knights of the Round Table are supposed to be brave, but other than Arthur or Gawain, they're all too afraid to strike the Green Knight in any way when he comes calling.

Gawain straight up attempts to murder the knight (but the knight was asking for this). And this isn't a problem because knights were all murdering bastards anyway (all sewn up into the romanticism of the age).

Gawain is warned that there will be repercussions for his actions. However, Gawain's hubris leads him to believe he can easily kill this obviously supernatural visitor, and thus not have to worry about consequences. It's some heavy-handed Christianity in the lesson of eternal justice.

Gawain knows he's going to die if he goes to meet the knight, but he does so anyway to keep his duty and his promise.

With regard to the Lord of the Castle's wife, Gawain is supposed to refuse the Lady's advances. But it's not just that. He's supposed to do so in a way that doesn't offend her. So he ends up compromising by allowing some kissing to happen.

Despite having come all this way to die, Gawain doesn't want to die, and he breaks his promises by accepting her allegedly magic girdle and not telling her husband about it. The magic girdle is supposed to keep his head attached when the Green Knight goes to behead him (and instead it will be the girdle that falls).

Gawain assures the Green Knight that he's the most honorable knight in the kingdom. However, we've seen him break his oath before in the story, so this is really more a commentary on the inadequacy of Camelot than on Gawain's virtue.

The tester is Morgan le Fay. Technically she's the bad guy and Arthur and his boys are supposed to be the good guys. However, in the story it is Morgana who is holding the knights up to their impossible standards of virtue, and they don't pass. Camelot is always shown as possessing lots of chauvinistic hubris.

Anyway, there never has been a good adaptation of this story, so I'm glad that one is on its way. Did I picture Dev Patel playing Gawain? Not really, but he will do. Because Gawain is described as being innocent and virtuous to the point of naïveté, I think I personally would have went with a wet-behind-the-ears teenager who knows nothing of the world other than his own cockiness. An annoying thirteen or fourteen year old would do. Keeping with the idea that young people did very adult things back in the dark ages, this wouldn't have been out of line. But finding someone that young who could actually act would probably be a challenge that is impossible in the age of Covid.

If you haven't seen the trailer, I've linked it below for your viewing pleasure.

Posted by Michael Offutt, Phantom Reader at 7:15 AM