Jupiter's Legacy is the first superhero story I've been exposed to that doubled down on straddling the gulf and conflicts that can arise between generations of people. 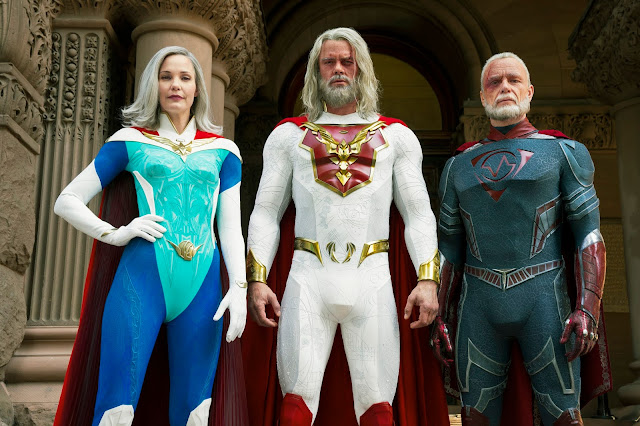 I finished watching Jupiter's Legacy on Netflix, and I gotta say that I enjoyed it quite a bit. I guess the show is adapted from a superhero comic book series created by Mark Millar. It's the first time that I'd taken notice of his work, although I guess he has quite a bit of superhero cred having penned Captain America: Civil War and Logan. Those are two stories that I enjoyed very much.

When I first saw the trailer for Jupiter's Legacy, I was going to watch it eventually. But then I heard or read some background information about Mark Millar, and it convinced me that maybe I should make watching the show more of a priority. One of the things I heard was that Netflix was looking at Jupiter's Legacy as a possible entry into the whole "shared-universe" thing. Thus far, I've liked what I've seen of "shared universe" story arcs, so this was an exciting development.

For example, I like what the CW has done with the Arrow-verse (which is now dominated by the Flash), and I like Universal's "Monster Verse" with King Kong and Godzilla. I also like the MCU and I like the DCU as well, even though I think DC would be stronger if it embraced (rather than shunned) its small screen stories. Why actors in movies and actors in television have always had a strained relationship is beyond me. But I think it has to do with a "stigma" that someone who appears on television is not a "real movie star." But are there actually any real "movie" stars today? I personally like to give all the credit of a "thing" being good to the writers and the directors. In the case of television, it is the showrunner that I pay respect to. But actors? Not as much.

Anyway, for all of the above reasons, I got more excited to see Jupiter's Legacy. And then I heard a story about Mark Millar talking with Stan Lee. I guess the two were chatting about Mark's work at Marvel, and Stan encouraged Mr. Millar to branch out on his own to tell his own stories. He said something like "Spiderman and the Avengers are old stuff. Every generation needs its own stories and its own superheroes, and I think you might be the right person to tell those stories." Even if this is paraphrasing (and it is) that would have been a remarkable conversation to have with someone of Stan Lee's magnitude. So Mark Millar took his advice and started doing his own stuff. That really got me interested in taking a deeper look and seeing what's there.

For what its worth, Jupiter's Legacy really does a good job straddling the gulf and conflicts that arise between generations. At the core of the story are these aging superheroes who really want to pass down a nice legacy to a group of youngsters with astounding powers. But "The Code" that they used to police their own activities doesn't fit well with the troubles of a modern world, and it puts them at unnecessary risk from increasing and horrible violence perpetrated by supervillains.

Jupiter's Legacy also happily embraces the dysfunction of families, at how the Superman-figure called the Utopian might actually just be a raging narcissist, and how the kids are riddle with anxieties and depression from being reared by a toxic narcissist. Every "super teen" in the show is pretty much broken in the mental department (neuro-diverse?), only they have tremendous powers and lashing out is incredibly destructive. But it also doesn't go quite the way of Amazon's The Boys which doubles down on the idea that the world is filled with nothing but horrible people. Instead, Jupiter's Legacy spends its eight episodes carefully convincing us that if we want a better world, we need to put in the hard work to make it happen, even if a lot of that work no longer makes good sense. With the end of the eighth episode (and season finale) I feel like the table is set for some bigger storylines, and some family drama that will end up changing the world of Jupiter's Legacy in a very interesting way.

Anyone else watch Jupiter's Legacy and care to share their opinions?

Email ThisBlogThis!Share to TwitterShare to FacebookShare to Pinterest
Labels: Comic Books Rule, Jupiter's Legacy, Jupiter's Legacy is the first superhero story I've been exposed to that doubled down on straddling the gulf and conflicts that can arise between generations of people