I had no idea that Hawaiian rainbows were the most spectacular on Earth but there's science to explain why. 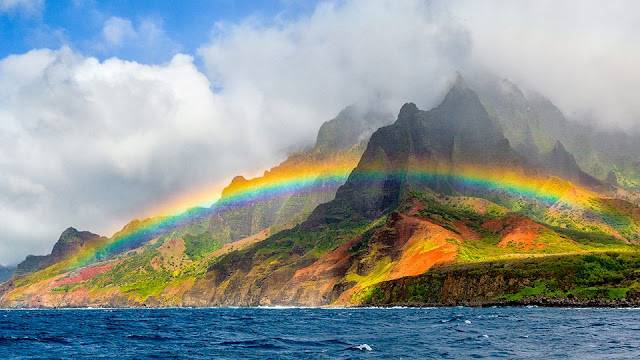 Having never been to Hawaii, I was fascinated to learn this weekend that the remote island chain produces the most spectacular and intense visible rainbows in the world. The scientific article went on to explain why. If you are curious, I'll explain what I learned.

First, and as a result of its isolation, Hawaii's remoteness means that the air is exceptionally clean and free of air pollution, continental dust, aerosols, and pollen. This doesn't just mean more rainbows, but it also means more rainbows with purer and more defined colors. Aerosols in the air in other locations of the Earth refract the color as the wavelengths approach the eye, diverting some of them and reflecting back only the color in the wavelength specific to the aerosol in question. This results in more muddled and less intense colors.

It can also work the opposite way with sunrises and sunsets, as aerosols can "filter" light already bending around the curvature of the earth to intensify one or two colors as they absorb the wavelengths from the white light and reflect sunset-y colors to the eye.

I also learned that rainbows are so important in Hawaii that their native language has different words to describe them. "Uakoko" means "earth-clinging" rainbows, "kāhili" means "standing rainbow shafts", "punakea" means "barely visible" rainbows, and "ānuenue kau pō" means "moonbows." These are just a few terms to describe the popular optical phenomenon.

A second reason for Hawaii's spectacular rainbows is that, being out in the middle of the ocean, its weather is heavily influenced by northeast trade winds. This causes frequent rain showers with clear skies appearing between those showers. Warm sea surface temperatures heat the air close to the surface of the ocean while the tops of clouds is cooled by the proximity to outer space, resulting in deeper rain showers in the morning that produce rainbows in time for breakfast.

A third reason is that Hawaii has big mountains which redirect trade winds to assist in cloud formation.

Now that I know all this, the big question is whether or not I will ever get over to Hawaii to actually see any of this. I'm not sure of that answer. I don't like to travel all that much, as mostly my mind sees a new place as just a change of scenery for things I do everyday, which is eat, go to the bathroom, entertain myself, and sleep. I've often found that I sleep much better in my own bed, than I do when traveling. So traveling really is just a change of scenery for things I do everyday but throw in "bad sleep," which means being tired all the time. I also enjoy reading. But I feel like if I went to a new place, and blew the money to do so comfortably, that reading a book would be a horrible way to experience it.

So, anyway, the jury is still out on that question. However, if any of you have been to Hawaii (who are reading my post today), would you confirm please on whether the rainbows were the most spectacular you have ever seen? Inquiring minds (like mine) want to know.

Posted by Michael Offutt, Phantom Reader at 8:22 AM

Email ThisBlogThis!Share to TwitterShare to FacebookShare to Pinterest
Labels: Hawaiian rainbows, I had no idea that Hawaiian rainbows were the most spectacular on Earth but there's science to explain why, It's Science