It is difficult for me to understand why people do the things that they do. 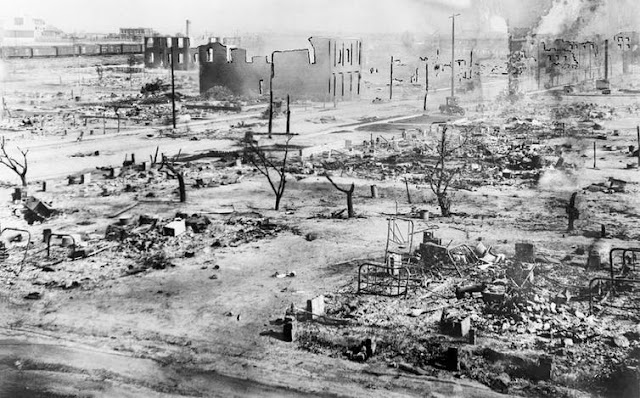 I thought I was a relatively educated man approaching fifty. But in the last year I learned of two things that I had no previous knowledge about: the Tulsa massacre and Sundown towns. Both of these I actually learned about by watching either Lovecraft Country or Watchmen on HBO. I never read about either of these things in a history book in any class that I took in high school or college.

The New York Times wrote about the Tulsa Greenwood Massacre in incredible depth yesterday, since it has been a century now since the event occurred. It was a real eye-opener, because they showed what the town of Greenwood meant to its black inhabitants (in a slick computer-generated presentation), and to how it was a place of prosperity and pride for a population that was not welcome in the greater Tulsa area. Fast forward to 2021, and very little has changed. And the nation is still struggling with the way it deals with the narrative and facts of what happened in Tulsa a hundred years ago. Just recently, Oklahoma Governor Stitt got booted off the 1921 Greenwood Massacre Centennial Commission because he signed a law prohibiting the teaching of why Greenwood was burned to the ground. Like...why would you do that? Why would you not want it taught so that people could learn about it, and keep other people (like me) from having to confess that they are/were ignorant?

Sadly, you can look at Google maps today and see that where the federal Interstate highway was placed when they cut through Tulsa that they chose a path right through Greenwood. Of course they did. No one of importance (and nothing of importance) lived/occurred there, right?  I wonder if publishers of textbooks will ever have the courage to air within their pages events like Tulsa, or speak openly about the planes that flew overhead to drop dynamite on the buildings. And no one had any problem with that at all, because (apparently) it happened as a result of a black man assaulting a white woman. That's how all of these kinds of stories start out. The reaction was breathtaking, and (to me) it almost feels like it was an attempt at genocide.

It is difficult for me to understand why people do the things that they do. What goes on in someone's mind to make these things happen? Are there words one can say to describe the history of how black people were pushed and violently oppressed in the white-mob mentality to "stop the steal" of their supposed divine right to wealth, land, and prosperity? Much of that entitlement still simmers today. I wish I understood where it comes from better, rather than just observing that "there's really unpleasant work to do and the cotton doesn't pick itself so somebody is going to be forced to do it." Is that really what life is about...being the one person who gets to have a good life at the expense of someone else? Must there always be a loser for every winner? These are all questions that I have in my mind that don't make any sense.

Posted by Michael Offutt, Phantom Reader at 7:47 AM

Email ThisBlogThis!Share to TwitterShare to FacebookShare to Pinterest
Labels: It is difficult for me to understand why people do the things that they do, Tulsa Massacre