I have thoughts regarding the Saturday Night Live episode that aired this weekend with host Elon Musk. 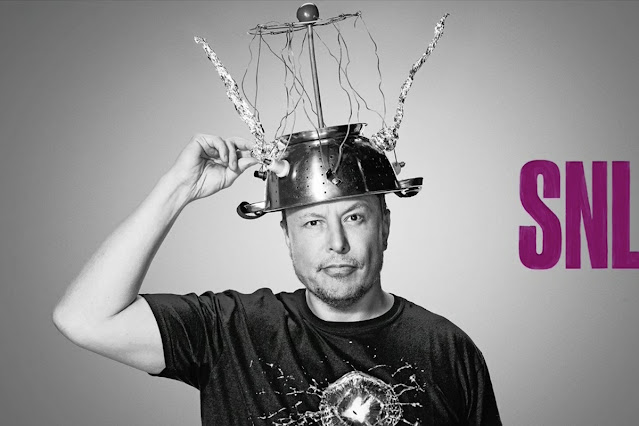 This weekend, I (along with millions of others) watched the Saturday Night Live appearance of Elon Musk as a host of the show. There are lots of people who hate this guy for his anti-trans and anti-masking statements. He's managed to accrue an amount of wealth that is staggering to even imagine, and by being the poster-child for that kind of income inequality is to invite comparisons to a Smaug-like dragon sitting on a pile of treasure while others die of poverty (this is completely true by the way).
He makes weird choices when naming babies. He's also a hypocrite (being high on Joe Rogan's podcast while representing Tesla and then terminating the employment of anyone who dares to show up high to work at any of his companies). This last one is (honestly) more about middle management gate-keeping and policies to protect company assets (H.R. departments, risks, and whatnot) than it is about the ethics of employment. But still, there's lots to hate this guy about.
On the flip side, Elon is pushing forward car electrification, space exploration, and solar energy, which seem to be all good for humanity. He's used his PayPal money to kind of push humanity in what I think is the right direction. As the old expression goes, "You can't break an omelet without cracking some eggs." In this case, there's a whole lot of egg cracking going on in our society right now. When you think of those eggs as the lives and fortunes of human beings and find empathy for them, then I understand why people are angry and upset with Elon Musk.
I (personally) don't know how to feel about him. He isn't important to me. I don't look up to him, but I also don't hate him. He's just a person who seems to have an enormous pile of money that should be distributed more evenly. But we have a society that (by and large) does not have the power or teeth to do that kind of thing without violent revolution. And as I'm not a revolutionary, I guess I'll just take the fact that he's some kind of celebrity that I should know about if I'm going to take any interest in this world of ours.
So, how did he do as a host for Saturday Night Live? Well, I will tell you that I was surprised when he outed himself as someone with Aspergers. I had no idea that he was on the autism spectrum. Additionally, I'd like to point out that the term "aspergers" is dated, but I get what he was trying to say in his opening monologue. He's also not an actor, and that is obvious in the stiffness with which he delivered his lines. I've read online that some people would like him to donate money to researching neurodiversity, and (I think) this comes from a place of wanting to find a cure for it.
However, there probably isn't a "cure" for autism. Rather, research is usually focused around trying to understand what it is and to teach others solutions and methods that work when dealing with the challenges this disability presents. The idea is that if neurotypical people can alter how they interact with a neurodiverse person, it will empower "neurodiverse" people to lead productive lives in our society. In other words, it's not them that needs to change. It is you, and that means work on your part.
It sounds all good on paper, but when I recall how hard it was to "teach" people to respect others enough to wear masks (and it didn't happen and resulted in violence), I honestly don't know if we can teach at least a third to half of the population how to deal with neurodiverse people in a way that is respectful. It feels impossible, and I'd say, "Good luck with that, and I hope you don't get punched or shot by someone who doesn't want you to impinge on their freedom to be an asshole."
As far as Elon on SNL is concerned, it looked like he was trying his best to be funny. It fell flat a few times, but I laughed out loud during the Chad on Mars section, where Elon got to play himself. I think that was the funniest skit. Here's a link to it for your viewing pleasure.
If you don't know who Chad is when referencing Saturday Night Live, Chad is a recurring character played by Pete Davidson. He's supposed to be an apathetic, easily distracted youth with limited conversational skills whose catchphrase is "okay." He also seems to be rather stupid, and he is not moved at all by grandiose displays of love. For some reason, I find the "Chad" sketches to be funny, because (I think) I know people in real life that behave in this manner.
Did anyone else watch Saturday Night Live this weekend? If so, I'd like to hear what you thought about it.
Posted by Michael Offutt, Phantom Reader at 8:06 AM