It's 2021 and Wizards of the Coast is starting out of the gates with a lot of really interesting developments for their popular games.

I'm usually not one to talk about news releases, but one that happened on February 25th caught my interest. Hasbro, the parent company of Wizards of the Coast, is giving Wizards its own operating division. Wizards of the Coast is the parent company to Dungeons & Dragons and Magic: The Gathering, both of which are games that I enjoy and love to play. They also have tons of other games, but those are the two big ones that impact my life.

The Dungeons & Dragons fifth edition ruleset is my favorite that has ever been put out. I've played all the versions except the fourth edition one, and that was because I was in a time of my life when I thought I'd try my hand at going to the gym and being a normal person associating with other "normal" people who are not nerds and like to go to nightclubs and date and all that. After I got over this period of my life (with a huge realization that you just have to find people who are into the same things you are and you'll find happiness), I returned to running Dungeons & Dragons. To explain a bit further, I choose to run rather than play D&D (ever hear of the term "Dungeon Master?") mostly because all the people around here suck at it, and I'm a born storyteller. I always advise young people to "play to your strengths."

Anyway, a lot of people apparently think like I do, because D&D is more popular now than it has ever been, literally seeping into the bedrock of pop culture. But none of that happened because Wizards got lucky. Rather, it happened because they are working really hard at doing a great job and making a game that is both diverse and inclusive. The supplements they are putting out right now are of the highest quality that I have ever seen in decades. The game is so detailed and welcoming with mind-blowing art and fleshed out non-player characters. And the adventures are these huge sandboxes that are just loaded with fascinating details and all kinds of things to keep people entertained for hours on end. There is so much world development going on with the fifth edition game that I can only say it is very impressive.

Additionally, the stuff that you can acquire to enrich your home games is incredible. The sky is literally the limit from a basic no frills setup to hundreds of thousands of dollars. I fall somewhere on the lower end of that spectrum, but every penny I have spent toward Dungeons & Dragons stuff has been more than worth it, whether it was miniatures, terrain, or books. So yeah...long story short, Wizards of the Coast has been knocking it out of the park for five years now. Really, the best thing for Hasbro to do with Wizards of the Coast is honestly just to get out of the way of Wizards of the Coast and let them work their magic. So I was really happy to find out that is exactly what is happening.

Other things that were included with the news release had to do with the Magic: the Gathering card game. I guess that Lord of the Rings and Warhammer 40K properties are going to have some crossover in the collectible card game. That should please fans of both of those intellectual properties. They are also going to re-explore the demiplanes of dread in a new supplement called, Van Richten's Guide to Ravenloft. This stuff is going to be all new material based on a boxed set of products that hasn't been touched for twenty-five years or so. However, I loved what they put out way back then. It's going to be nice to have those areas of gothic horror explored in a new 2021 supplement with all new art and updated super villains with recurring characters from the Curse of Strahd adventure that I ran (with great success) to some eager players a couple of years ago. 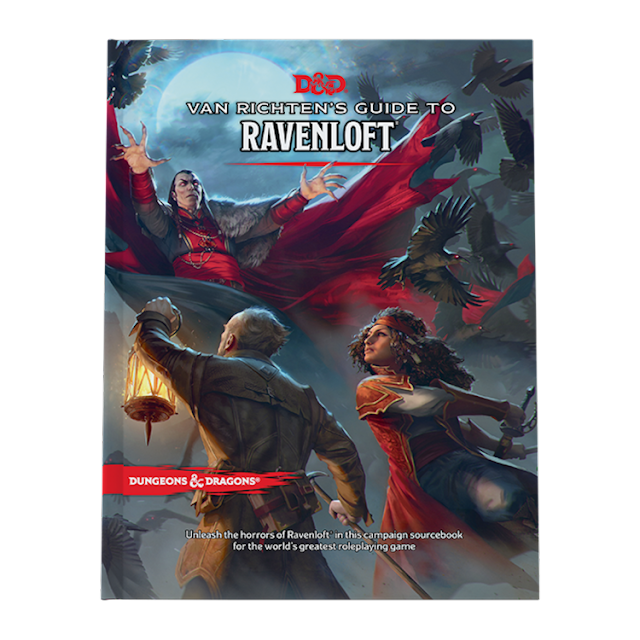