Mysterio's magic act in Spider-Man Far From Home is totally believable to me. 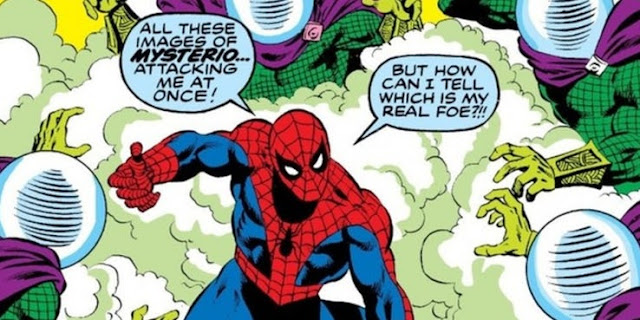 There are some spoilers in this post for Spider-Man: Far From Home.

I've been surfing some of the discussion zones for Spider-Man: Far From Home, and some people are doubting that Mysterio could do all the things that he does, even with Stark technology. Here's one such comment:


"Need to re-watch again to see all the scenes of Mysterio pre-reveal, and see if it all lines up to the illusion tech. One scene that comes to mind is when he has his heart-to-heart with Parker on the roof--he goes from flying to sitting next to him; was that all illusion or was Beck actually there? Hidden by the drones and then seamlessly integrated, or all hologram? What if Peter had wanted a hug?"

Here's how I responded to the guy's question:


"I know that this comparison isn't quite the same thing, but I've seen David Copperfield's magic act live at the MGM Grand. Copperfield made me believe that he could teleport things, levitate cars, make things disappear, and the list goes on and on. Honestly, it looked like he'd sold his soul to the proverbial devil for real magic powers (if you believe in that kind of thing). With Mysterio using Iron Man's technology...I won't even try to figure it out. With that kind of support behind him, Beck should be able to do anything...craft any illusion. Because of my experience with Copperfield, I had no trouble believing that all of those illusions and their effects could be staged exactly as they appeared in the movie, with the end result being that everyone (including Spider-Man) is fooled."

And I'm speaking honestly and truthfully here. If you've never attended a real magic show by someone with a hell of a reputation, you should fix that in the near future. These people can craft illusions from the stage that are mind-blowing. I've seen David Copperfield and Criss Angel both in Vegas (Criss isn't quite as talented as Copperfield, but he has a different kind of show). I'm also a big fan of Penn & Teller, who seem to also be on that same level, if not at least in the same ballpark as Copperfield.

Anyway, I guess my point is that illusionists are pretty incredible people, with talent and skill that goes beyond what us mere mortals can understand. Take that a notch up with Iron Man tech? Well let's just say that all the craziness on display in Far From Home looks perfectly believable to me.
Posted by Michael Offutt, Phantom Reader at 12:14 AM