I really love this alternate Alien movie poster by the artist Gabz.

The website io9 recently talked about an art show that's happening at the Bottleneck Gallery in Brooklyn, New York for the artist Gabz (real name Grzegorz Domaradzki), who created this piece below (and others for Star Wars) that have gathered fame for their ability to fool the eye into thinking it's a photograph. I think the term for this kind of art is "photo realism," and it's super hard to do. 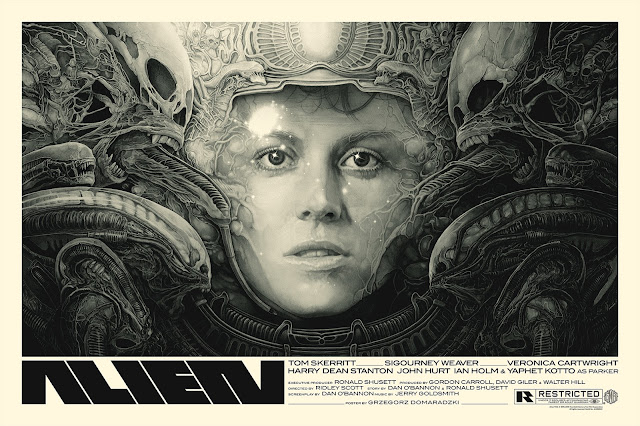 What do I love about it? The details are great. Not only is the centerpiece instantly recognizable as belonging to Sigourney Weaver, but the font looks like an actual print job. The details of the xenomorphs on both sides of her face are clearly an homage to Giger in that they are rendered perfectly, just as he would have done with his famous airbrush. And there are swirls within swirls. Good Alien art has always been heavy on the details. That was a thing that Giger prided himself on: detailing even the smallest corner of a massive painting so that there were objects that caught the eye that were interesting and macabre. The only thing really missing from this piece is Jones the cat.

I also think there is some foreshadowing going on with this poster. There are four xenomorph heads that are directly in contact with Ripley's space suit, possibly hinting at Alien movies 1 through 4. Additionally, I love that she seems to be transforming into a xenomorph (or has xenomorph traits) as her long association with this franchise changes her physiology permanently by the movie Alien 4. You can see what I'm talking about with the appearance of the vein-like structures that touch both cheeks.

I wonder why Alien couldn't keep the train driving firmly on the rails after Aliens. It's so frustrating, as I've seen Bond movie after Bond movie come out, and most of them are entertaining. The same goes for the Fast & Furious movies. Why did those franchises work out so well, and Alien just bombed? Maybe it was the lack of anything new to do with the story, which forced writers to revisit horror after horror to try and provide more shock value with each telling. I mean, there's only so much a person can be shocked about, especially when the first movie pretty much gives the world a glimpse of a monster and a physical gestation cycle that was never seen before in books or in film.

So maybe the search for shock value is what ultimately made the Alien franchise movies fail beyond the first two. If that is true, at least there are artists who are continually inspired by the universe established by H.R. Giger to keep moving forward with works (such as the one above) inspired by one of the greatest fictional monsters ever imagined.
Posted by Michael Offutt, Phantom Reader at 12:34 AM

Email ThisBlogThis!Share to TwitterShare to FacebookShare to Pinterest
Labels: Alien, I really love this alternate Alien movie poster by the artist Gabz