Here are the three panels I'm excited to read about from San Diego Comic Con this week. 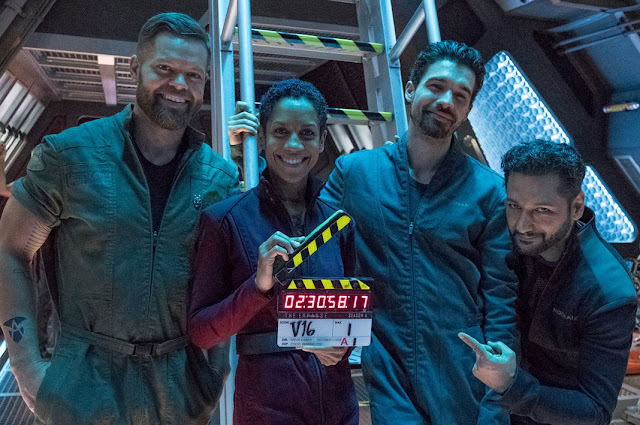 I probably won't ever go to San Diego Comic Con. I don't like crowds, and from what I've heard, SDCC takes the cake as far as that goes. However, this doesn't mean my "Google Fu" isn't top notch. I play a good game when it comes to following up on things that interest me. So in case you are one of those people that likes to know what I'm interested in hearing about this week from the many panels at SDCC, I'm posting about the three I'd attend if I were there.

The Expanse. It seems like forever since season 3 ended with all of the ring gates opening up, revealing entrances to 1300 individual systems spanning an entire galaxy (and each one with either something interesting or a habitable world to explore). I saw on social media last week that season 4 has now been all wrapped up and post-film production (and editing) has begun. People who follow the industry closely believe season 4 will hit Amazon Prime sometime in September or October, and I'm super excited. In the meantime, I want to read what the panel at SDCC dares to reveal! There is most certainly going to be a trailer, and I hope that the authors who are known collectively as James S.A. Corey reveal the title to the sequel of their book, Tiamat's Wrath. I simply must know where all of this is headed. Breadcrumbs are much appreciated. The panel takes place on Saturday, July 20th, from 1:00 to 1:50 in the Indigo Ballroom at the Hilton San Diego Bayfront.

The Witcher: A Netflix Original Series. Henry Cavill is Superman no more! Now his new role is to play the lead in The Witcher (called Geralt of Rivia). My friend James played the video game, and he really loved it. And Cavill's makeup job in The Witcher has got people buzzing that he looks a lot like Legolas did in The Lord of the Rings movies. I do plan on reading The Witcher books, which are a series of short stories and novels written by Andrzej Sapkowski going back to the 1990's when fantasy was just starting to explode on the market. The saga consists of the following books: Blood of Elves, Time of Contempt, Baptism of Fire, The Tower of the Swallow, and The Lady of the Lake. The panel takes place on Friday, July 19th, from 2:15 to 3:15 p.m. in Hall H (good luck to anyone trying to get access to Hall H).

Terminator: Dark Fate. I've seen every Terminator movie. I've only really loved Terminator and Terminator 2: Judgment Day. Both of those movies were directed by James Cameron. But this doesn't mean that I'm not a sucker for everything Terminator. I kind of like the universe, because I kind of like apocalyptic tales. There's a lot of interesting things that could come out of this movie, like answers to the questions: 1) Did Judgment Day never happen? 2) Will Judgment Day still happen? 3) Why is Sarah looking for vengeance if she won in Terminator 2? That Terminator as a franchise has moved beyond the fears that my entire generation had of World War 3 has probably never occurred to studio execs. Which means that (from my point of view) the thing is doomed to tank at the box office. However, what do I know? I mean...the fears of the new generation are all centered around climate change. However, this doesn't mean Terminator won't get my money yet again. There's something fun about watching these machines take on people in action-packed sequences that makes me want to watch with my butt glued to the chair. And I like that Arnold and Linda Hamilton are back (we haven't seen her in a long time!) It'll be interesting to see how Linda's character has grown through the years. The panel for this movie takes place on Thursday, July 18th, from 11 a.m. to noon in Hall H.