Good Omens nails its ending which in my book makes it exceptional in the unremarkable genre of urban fantasy. 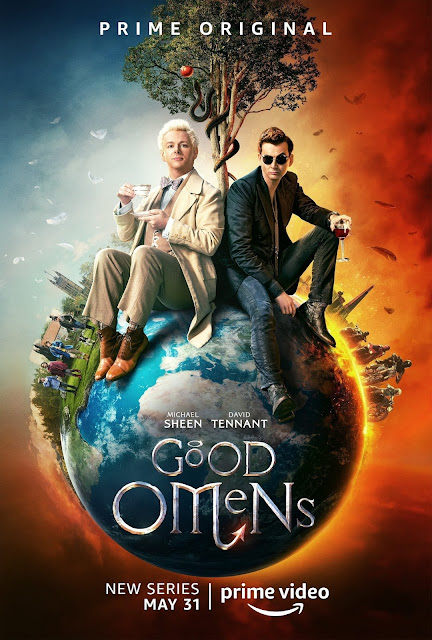 There are no spoilers in this post so you can read the whole thing.

This weekend I binge watched the mini-series Good Omens with my friend Meg, and I was pleasantly surprised and had an overall feeling of satisfaction after it concluded. I think the main reason for it is that the mini-series (and I'm guessing the book as well) nailed the ending.

Ever since Game of Thrones ended, I've been examining over and over my reaction to endings and how a negative one can taint the entire thing. So for me, I've realized something that may not be true with others: it's not just about the journey--the ending must land for me to enjoy a good story. I'm not sure why this is, or what's wrong with me psychologically that I can't just appreciate a journey and realize that the ending is only a small part of the entire time that was spent. But it is what it is. I have to get a good ending people. :(

An ending is so important (in fact) that it can actually make me like something that I originally felt so-so about. Good Omens for what it is, seems like old hat these days. Its plot is nothing new. Practically all urban fantasy has demons, angels, and retreads of the Anti-Christ and witches and ghosts and zombies to the point of it being ad nauseum. Supernatural, The Dresden Files, The Iron Druid, the Anita Blake books, and on and on and on. These stories just recycle each others plots and Good Omens is essentially breaking no new ground at all. I have a feeling that if a nobody had written Good Omens, it might not even have gotten published these days because there are half a dozen stories just like it out there on shelves already. However, what it does do good is make you care about the characters. And then it gives an extremely satisfying conclusion that feels good.

It's unfortunate really that Game of Thrones couldn't do this. With as much time and effort as George R.R. Martin and the actors did by inhabiting roles he created, I feel like his whole saga has been tainted a bit...discolored...and, well, perhaps shat upon? If we are being perfectly honest. Not that he or HBO didn't make their money's worth, but still.... And my feelings toward endings may not be shared by a lot of people. So I get that. But I think that if May 2019 left me with anything (looking back on it) it was this: that I understand moreso than ever before where my joy comes from when looking at stories. It lies with endings. They've got to land in a way that resonates with me...in a way that leaves me fulfilled so that I can walk away from these characters with a feeling of peace.

So I guess that's it. For me to be happy with endings, I need to feel like I can walk away from the story, from the characters who I spent time with, and I need to be able to say, "I am at peace with them." I hate endings that leave things unsettled and conflicted. Conflict as part of a story should be in the middle and not at the end, and Good Omens does this. It's a wonderful tale, and even if you are jaded by urban fantasy stories, it's worth the time to watch all six episodes.
Posted by Michael Offutt, Phantom Reader at 12:07 AM

Email ThisBlogThis!Share to TwitterShare to FacebookShare to Pinterest
Labels: Good Omens, Good Omens nails its ending which in my book makes it exceptional in the unremarkable genre of urban fantasy