People in prison should be allowed to vote because the invisible garbage of our society is voting right now. 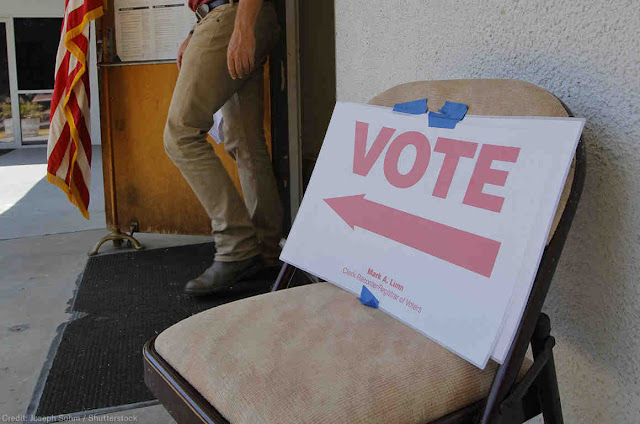 In Utah, I've debated with some people who are appalled that Bernie Sanders wants people in prison to be able to vote. I think that Bernie is absolutely correct, but not for the reason that most people think. I have what I call a realistic view of the people I interact with everyday, and it's this: a lot of them should be in jail but they haven't been caught. The only difference between them and people who are in prison is exactly that. The people in prison were unlucky enough to be apprehended and serve as a lesson to the rest of us to try and toe the line.

If you point at a church full of people, a school full of people, or a business full of people, I will assume that there's a big percentage of those in that actual building who are thieves, serial abusers, pedophiles, rapists, grifters, tax-evaders, and drug-dealers. Whatever thought processes that lead them to make the decisions that they do are the same thought processes that led people before them to do those things who are in prison. However, the people in jail--the unfortunate few who got caught and punished--don't get to vote.

All those criminals who haven't been caught who are sitting next to you in church DO get to vote and they are changing society to reflect perfect conditions in which they can thrive and exploit others for their personal gain. For example, take the pedophile. I would not be surprised if the closeted pedo that no one sees goes and votes to make the burden on single moms even more extreme than it is now. Having low wages and no support means an adult guardian is going to be overwhelmed. This means they'll be less vigilant in protecting their children, making the "kids" available for kind entreaties of "I can watch the kids while you do this and that...." It's all so subtle and insidious, but yeah, that's how that works.

To think that people who are somehow "not incarcerated" are ideologically pure and have a strong moral compass and are smart and good is asinine. It's delusional in the same way that believing magnets in your shoes will cure cancer. I know that this viewpoint is going to clash with some out there who want to believe in a narcissistic way that those who do wrong always get punished. I say "narcissistic" because a lot of the time, the people who believe this actual thing are criminals, but they would never label themselves as such. It's the same cognitive dissonance that makes a "job creator" not think of himself as a "wage slave owner," and for them to consequently declare that they are morally good and should be voting.

I'm under no such delusions. I'm not Anne Frank. I don't believe people are good at heart. I believe people get away with murder, kidnapping, rape, and other horrific crimes ALL of the time. I also believe that you don't have to be smart to get away with things. Our society is so bad at ferreting out wrong-doers that you can be stupid as a sack of cement and get away with something. It happens all the time. But in our country, these people get the privilege of voting. It's time to even the odds.

In a perfect world, where only people with strong moral compasses and compassion were somehow selected to vote and all others were denied, then maybe (just maybe) not allowing prisoners to vote would actually make sense to me. But we don't live in this world. We live in a world awash with the invisible garbage of humanity--invisible because we haven't flagged it for law enforcement. It's floating everywhere. So, it makes sense to me that if we let "invisible garbage" vote, we should let the "visible garbage" vote too.

Anyway, it's a good idea. Bernie Sanders has a lot of good ideas. I'm just surprised I never thought of the whole, "Let those in prison vote." It makes so much sense. I hope it comes true someday. We could learn a lot from our brothers and sisters who have had their lives ruined for doing things that people get away with every day.
Posted by Michael Offutt, Phantom Reader at 12:16 AM

Email ThisBlogThis!Share to TwitterShare to FacebookShare to Pinterest
Labels: Bernie Sanders, People in prison should be allowed to vote because the invisible garbage of our society is voting right now