Would a world where kaiju are worshiped by humans ever run out of fun plotlines? 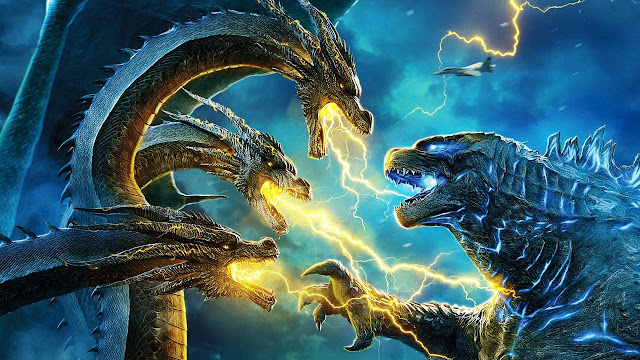 I was talking with a friend this weekend about Godzilla: King of the Monsters, and we ended up talking about the surprise inclusion/revelation of a previously unknown and undiscovered civilization that obviously worshiped Godzilla as a deity. In Kong: Skull Island, there was another group of individuals still actively worshiping Kong as a kind of god, and there were some strong hints that Mothra may also be worshiped by twin priestesses (which is a tradition in kaiju movies that include Mothra in them). And as we know from previous kaiju movies, the priestesses preside over a small gathering of prehistoric worshipers who live on "Infant Island," and may be able to draw upon the equivalent of mystic powers.

So thinking about all of this, the Godzilla: King of the Monsters movie may be the third installment (in a movie franchise beginning with the Godzilla reboot in 2014 by Gareth Edwards), but it is the first movie in the trilogy to firmly establish an entire world wherein humans have learned to live with "Titans" or "Kaiju." And it was Ken Watanabe's character's shtick the entire time in the movie, with him saying (essentially) that humans would need to learn to be the pets of Godzilla (and not the other way around).

It's apparent to me that these previous civilizations did exactly that by worshiping the Titans as deities, which (let's face it) they basically are. Conventional weapons which humans take for granted not only seem to be ineffective, but actually strengthen the kaiju. Sure, there was that oxygen destroyer thing which seemed to only really harm the one kaiju that was on our side, but it potentially might be effective against others. But the cost of using it was really bad. That being said, I don't really see a way you could deal with these creatures very well without risking your own life and the lives of thousands if not actually millions of people. King Ghidorah was so powerful, it created hurricanes in the atmosphere just by flying around. And Rodan was so incredibly strong in flight that conventional fighter jets stood no chance against him. If you can't beat them, join them, right?

It makes me wonder what this kind of world is going to look like. If humans choose to go about worshiping the Titans as gods in order to gain their protection against other kaiju, civilization is going to be very different (by its very nature). I'm eager to see what new developments happen in a world where big creatures could, at any moment, appear and start destroying huge cities. It honestly sounds like the kind of world which would be fun to explore in a story, or even a tabletop roleplaying game. How fun would it be to be a scientist having to take shelter in an underground bunker, because a gigantic kaiju rose out of the ocean and started laying waste to the city? I just wonder if this kind of thing will make a good string of movies, or whether it will run out of ideas.

Posted by Michael Offutt, Phantom Reader at 9:32 AM

Email ThisBlogThis!Share to TwitterShare to FacebookShare to Pinterest
Labels: Godzilla, Godzilla King of the Monsters, Would a world where kaiju are worshiped by humans ever run out of plotlines? Kaiju