Into the Badlands was a martial arts extravaganza and that's all that really mattered. 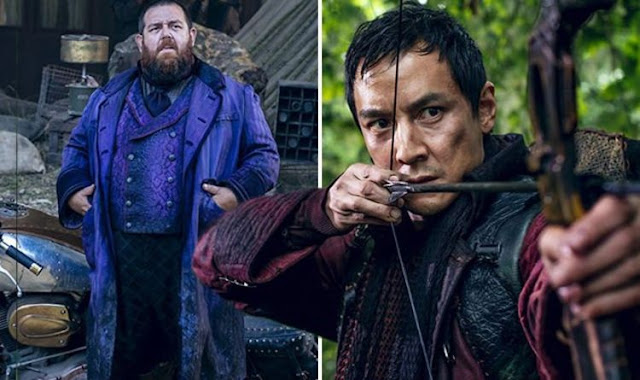 Recently, I finished watching the series "Into the Badlands," and overall, I found it pretty satisfying, because the kung-fu and wirework remained top notch until the end. When it first started back in 2015, "Into the Badlands" was one of those shows that struggled with what it wanted to be. You had this setting of "the Badlands," which was ruled over by barons who held onto territory via the might of their armies of kung-fu trained warriors called clippers. The main character in all of this seemed to be Sunny, but it pretty quickly introduced a character called M.K. who had a supernatural power that made his eyes go black and made him pretty much unbeatable by everyone. I thought this guy was going to be the main character. I was wrong.

Over the course of several seasons, who was in the lead kind of shifted about. M.K. started to become a villain, and in true Game of Thrones style, characters just got killed. Sunny's baron who I thought was going to be the big bad was basically a speed bump and got killed relatively early in the series. His widow rose to prominence and was going to be gifted all of the Badlands but she got killed too. Okay then. Soon it was just Sunny running around trying to save his baby son's life and in doing so, he got introduced to a long lost brother who had evil powers (named Pilgrim) and who had a powerful witch as a partner. He ended up being the big Bad, but didn't really show up until the last two seasons. I thought that was an odd choice. It gets even weirder: Pilgrim ended up using his powers to save Sunny's child, but Sunny then betrayed Pilgrim and ultimately defeated him in the season finale with the help of his friends Bajie and the Widow (who was basically the second-best badass in the series).

M.K. with his supernatural dark power that switched on super kick-ass kung-fu ended up being one of hundreds of warriors (so it really wasn't all that special) who had this talent, and they all joined Pilgrim to basically murder everyone else on earth. That didn't entirely make much sense either. However, it was fun to watch them fight. And I guess that's what I came to watch this series for in the end anyway. Naturally, the Widow, Sunny, and Bajie (a fat martial artist that was fun to watch in that role) had some people they could call on that trained their whole lives to defeat those who relied upon supernatural powers to juice their kung-fu. With these guys, they were able to take Pilgrim down and kind of/sort of save the world.

The last scene of "Into the Badlands" had a former disciple of Pilgrim finding an old west pistol buried in the sand and miraculously, it's loaded and he shoots it, and he kind of marvels at how powerful the weapon is. It makes me wonder where they might go with it. But, if it's a western in the next series, I'll pass. I've never been all that into westerns.

I did appreciate the lore that "Into the Badlands" created. They had lots of supernatural things that stemmed from whatever it was that made some warriors into complete badasses by turning their eyes black. Some of these people could use that power to heal their own flesh or even resurrect the newly dead. It was called "The Gift" and it never went to any length to explain just how some people got it, and others did not. It also explained that Pilgrim stole his "Gift," but I don't think I ever understood just why his stolen gift was so incredibly powerful (he could basically dust anyone that stood against him). Honestly, it felt a lot like plot armor.

Another thing I appreciated about "Into the Badlands" was that even with the interjection of things that could be seen as sorcery and magic, that to create anything good required a lot of elbow grease. People who went looking for the mythical city of Azra (for example) learned the truth about the place during the story. When it was found to be destroyed, Pilgrim decided he would create a new one and proclaim himself a god. Okay then. Additionally, people just didn't fall in and create a utopia, they had to be made to do so. Everything felt like it was earned through hard work for better or for worse. I feel like this kind of thing is missing from the real world a lot. For example, I know a lot of people who go to work for others and expect to be guided into a career, and they end up disappointed and depressed when it doesn't happen. For me, that just makes perfect sense. It's been my experience that in order to get anywhere in life, you have to make it happen because it's never just going to pop into existence all on its own.

"Into the Badlands" was all about people making things happen, and the entire storyline was driven by these people for good or for ill in trying to make whatever it is they cared about happen.

Was "Into the Badlands" worth watching? Yeah. I mean...it wasn't great, but if you like watching wire work and people kicking others while wielding swords, it's great. Plus the Widow fights all her antagonists wearing stiletto high heels. That right there should just tell you how truly awesome at fighting she was.
Posted by Michael Offutt, Phantom Reader at 6:56 AM