I'm five episodes deep into Titans and I think it's actually pretty good. 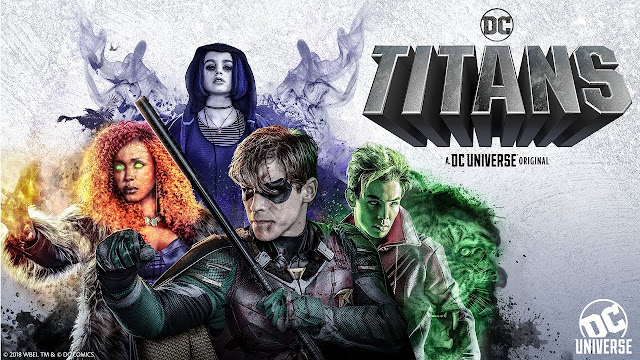 I finally broke down and subscribed to DC Universe so I could watch Titans, Doom Patrol, the third season of Young Justice, and Swamp Thing. I did get a seven day free trial, and I've been rapidly consuming Titans (I'm on episode five of thirteen as of this writing). I know I'll have to pay for at least a month just to get through all of these shows, but I want to give credit where credit is due, before you just see this as a subscribe/binge watch/ and cancel routine to save money. Titans is actually kind of enjoyable despite what I've heard other people say (which did prove to lower my expectations quite a bit).

Most of the negative criticism is directed at the series by Titans die-hards. And by all reckoning, I should be a die-hard Titans fan. I owned all of the original run of the comic books by Marv Wolfman and George Perez. For a time, I enshrined my "Who Is Donna Troy?" and my "Who is Wondergirl?" comics in mylar. My favorite characters are 1) Raven, 2) Donna Troy, and 3) Starfire in that order, although (just to be fair) I love all of the Titans. I should pound my fist as to why Raven doesn't manifest her soul self by episode 5...that thing is integral to her character. I should be bugged as to why Princess Koriander (or Kory Anders as she's called in the show) doesn't fly around with energy streaming from her hair or fire blasts of energy beams (not fire) from her hands (in the show she just shoots out fire like a flame thrower). Personally, the way Carol Danvers powers are in Captain Marvel remind me a lot of how Starfire should look. Those issues aside, I actually love this show.

Dick Grayson is very handsome. He's also got a huge chip on his shoulder from living with the Batman. I'm not sure how I feel about the Batman being painted as a psychopath, but the shoe does kind of fit. But in these first few episodes, Dick does kind of come across as a bit of an ingrate, reminiscing on a childhood that was stolen from him when his parents were murdered and which he landed in foster care and had the misfortune of being adopted by a billionaire who was in a perfect place to understand his particular trauma. Oh how unfortunate that must have been! Poor boy!

I actually love Gar (Garfield) who is Beast Boy. The casting on him seems to be perfect, and he too is quite handsome. Koriander is gorgeous so they nailed at least three of the cast. I'm not happy with Raven's look. In the comics she had an otherworldy maturity to her (and an otherworldy beauty to match). In the show she's a goth teenager who dyes her hair and is into tattoos and wearing black. There's way more to Raven's character than that. I am pleased that they are making a solid attempt at showing her incredible empathic and healing abilities. However, we need that soul self. It's just awesome, and I'm not sure why they aren't showing it yet.

I already know that Cyborg is part of Doom Patrol, and I'm okay with this choice. But in the Wolfman and Perez comics, Cyborg was a huge part of all of the stories. But then again, so was Titan tower, and I'm hoping that at some point we get to see an actual Titan tower. That would be great. I honestly don't expect much from the first season. I already know from a spoiler that Trigon the Terrible, when he appears, is just some actor. They probably didn't have the budget to make Trigon into his real comic book terrifying self, but who knows? Maybe they'll have that budget together a couple seasons down the road if this thing proves to have legs. Maybe we'll get some really amazing Titans's storylines.

It's what I'm hoping for at least.

So yeah, I'm five episodes deep into Titans and I think it's pretty good.

Posted by Michael Offutt, Phantom Reader at 7:01 AM