Let's talk about Tony Stark for a moment. 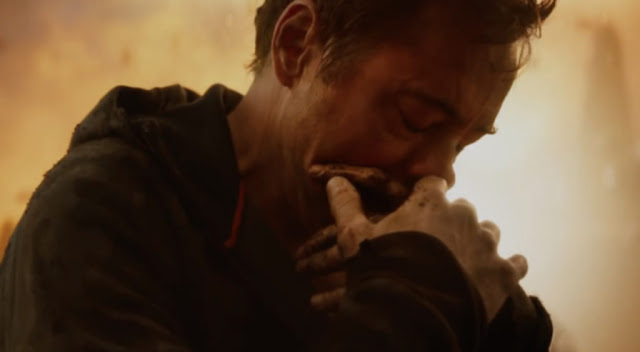 I know that everyone is talking about Avengers: Infinity War everywhere, but I honestly just wanted to talk about one more thing before I lay it to rest. And there is a spoiler warning here for those of you who have not seen it because it would ruin the movie for you if you read further. So please avoid this post if this is the case.

I have deep empathy and sorrowful feelings for Tony Stark. Yes, I know he's a fictional character, but this guy is one of the most beat up heroes that I have ever seen. In Civil War, he learned that his parents were murdered by the Winter Soldier and that his close friend knew about it and kept it from him on purpose. Then, he goes and starts this amazing friendship with a kid and then he starts talking to Pepper Potts about them having children only to have this kid, Peter Parker, killed in front of him. If that isn't a perfect reminder that he should never have kids, I don't know what is. And then (of course) there's the whole, "I failed to stop Thanos and now half the universe is dead because of it" thing that you just damn well know he's going to internalize all on his own. He's going to blame himself for the entirety of the Snapture, because that's what his character would do.

If HBO's The Leftovers taught any of us anything, it's that having a huge event like the Snapture suddenly "happen" will cause those who survive to have a "Guilty Remnant" kind of complex. They'll stand around and ask the eternal question: why was I spared? And why did this happen? Tony (for sure) is going to have these feelings, and I think it's going to go beyond any PTSD definition. I actually have no idea what happens with his character next. Right now he's broken, but pushed beyond that? Is there a classification for that? Insanity maybe.

Out of all the superhero survivors in the Avengers, I think Tony is the most beaten down, and the most likely to end up losing his mind. I just wonder what the implications of all that are going to be. For the record books and to any writer out there who is watching all of this play out, this is a perfect example of "torture your darlings" in action. But this particular story arc is extremely painful to watch.
Posted by Michael Offutt, Phantom Reader at 7:41 AM