These Dark Knight prints by artist Mark Chilcott capture the essence of their subjects rather well.

I subscribe to Bottleneck Gallery's newsletter, and I've bought some art prints from them in the past. The prints are usually numbered, which makes them somewhat collectible, and they usually come in a 10" x 14" size, which makes them great for framing. They are also done in giclée, which is a format for fine art digital prints that's made on inkjet printers that have more than just the CMYK color palette (think CcMmYK and you've got the picture). And yeah, it's easy to burn through ink on printers like this. They really aren't affordable to use unless you've got a ton of money to be out buying ink. It's further aggravated by the fact that you need to print pretty regularly on your inkjet printer or your nozzles will plug up/dry out, so they really are only useful for businesses that do a lot of printing because they can charge enough money for the prints to easily replace the ink on an as needed basis.

Anyway, Bottleneck Gallery's newsletter this last Friday was all about The Batman and some new prints that artist Mark Chilcott licensed for reproduction. I used to love the Batman so much. I still love his stories, but I've gotten to appreciate the Marvel stuff a lot more than I used to thanks to Marvel movies that have made me a huge fan. However, below are some of my favorite prints that they now have for sale. The rain is perfect for the Batman and always has been (to be honest). I don't know how many Detective Comics I've read that had art that took place in the rain. It seems like all the good ones did. The Batman was made for the rain, and lightning. It is a testament of Frank Miller's genius to realize this when he reinvented The Batman decades ago for The Dark Knight Returns, forever putting an end to the silly campiness of the character that extended forward from Adam West's Batman television series. 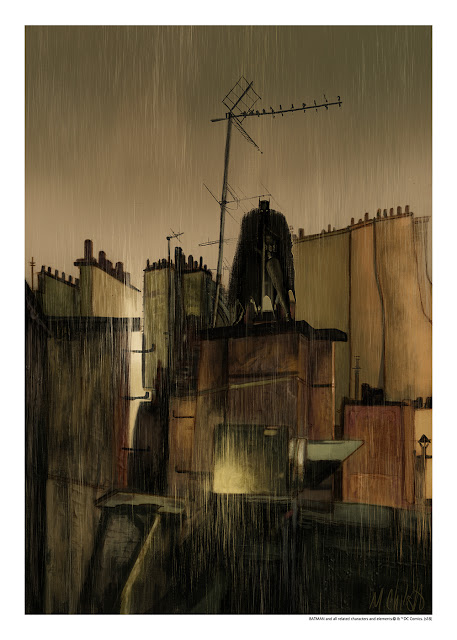 This is the Batman at his dreariest, staring down at an urban landscape that is devoid of any of the things that indicate wealth or happiness. It is the home of humanity's garbage, where people struggle to squeeze out a living under the dreariness of a sky devoid of color. It also sets the tone and mood of the character, who lost both his parents in an alleyway framed by buildings while it was raining. The fact that evil events and rain seem to go hand in hand is no coincidence in Batman stories. 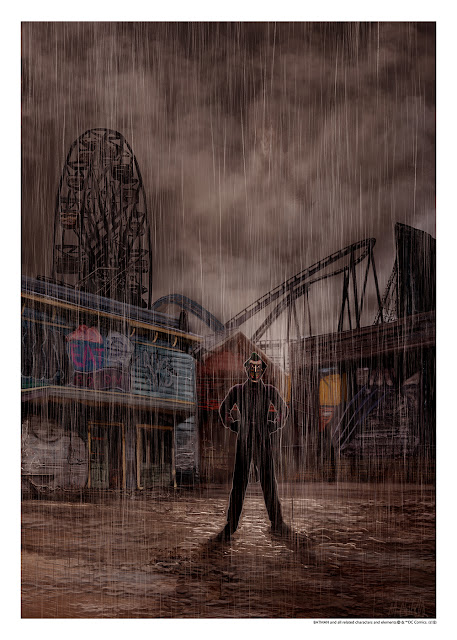 I love this picture because it's a fun park that isn't quite so fun right now because it's obviously been abandoned. It also may be a place where the Batman comes across his old foe, the Joker. But it just as well could be a funhouse mannequin of some kind. It's difficult to tell, but the art manages to broadcast this sinister feelings from this encounter rather well. 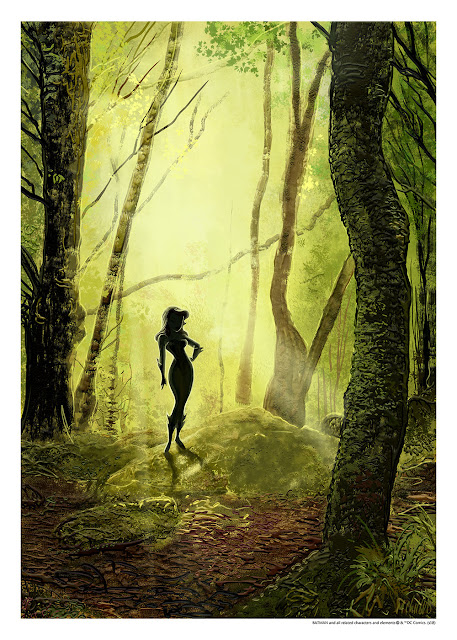 I love the bold use of green and yellow in this Poison Ivy tribute. It seems appropriate to have the Batman villain posing in the woods that (to the naked eye) look very inviting. The fact that she's mostly a silhouette is a hint that not all is as it seems and that what we don't see can actually be deadly. 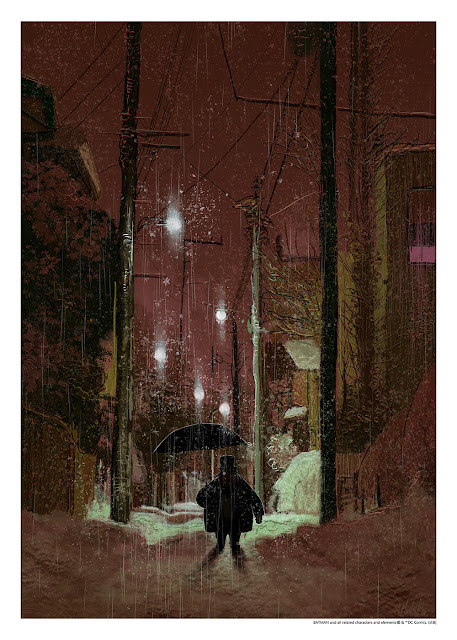 Penguin is a peculiar villain, and I like that Mark Chilcott drew him in a snowy setting. Penguins are birds that like the cold and the ice, so the symbolism is appropriate. One thing I love about this particular picture is the positioning of the streetlamps in the background. Every single one is lit except for the one directly above the Penguin.

There are other prints that Bottleneck Gallery posted for Mark's offering on the Dark Knight. If you have time, you should head over there and check them out.

Do you have a favorite of the ones I've shown you here today?
Posted by Michael Offutt, Phantom Reader at 7:49 AM

Email ThisBlogThis!Share to TwitterShare to FacebookShare to Pinterest
Labels: The Batman, The Dark Knight, These Dark Knight prints by artist Mark Chilcott capture the essence of their subjects rather well