If I'm interpreting Lando Calrissian's sexuality correctly then the term pansexual may be so broad that everyone on Earth is queer. 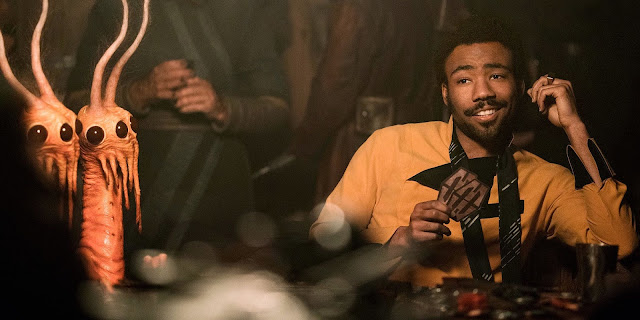 So in the news yesterday, among many things, was that Lando Calrissian is pansexual. You may not have noticed it, afterall, it is far less interesting than Stormy Daniels or North Korea. But it's important to the LGBT community because Star Wars has taken no strides at all in introducing queer characters. They simply don't exist within its universe. So back to Lando...this "revelation" (if that's what you want to call it) has been debated among Star Wars geeks for a long time, but he's supposedly attracted to some droids (or can be attracted to droids) even though gender in the Star Wars universe among droids is not discussed at all.

Pansexual as a term is defined as not limited in sexual choice with regard to biological sex, gender, or gender identity. Fair enough. I thought it meant something entirely different than what I'm reading into with Lando Calrissian. If that is how people are going to define pansexuality, then the character of Nathan (played by Oscar Isaac) in the science-fiction film Ex Machina was pansexual, even though Ava (played by Alicia Vikander) was clearly based on a female anatomy. Ava was (in the end) a robot, which makes Nathan pansexual.

So this gave me a double-take. For example, I happen to find Hiccup in How to Train Your Dragon 2 as an attractive character. He's clearly based on a male, but at the end of the day he's a cartoon. So I am attracted to a cartoon. That makes me pansexual. If you've ever looked at a drawing and been turned on by it, then you are attracted to art. That makes you pansexual. If you've ever read a book and been turned on by the words in that book, then that makes you attracted to words. Hence, you are pansexual. Ever used a sex toy to get off with? If you have, it doesn't matter what you were thinking in your headspace. It means that the presence of a toy got you excited and that makes you pansexual.

It's a fascinating way to think of sexuality, but honestly, I think it's so broad at that point as to be meaningless. By this definition, no one on Earth is really straight or gay, but probably would qualify as being pansexual. Ever see a statue that was so lifelike it turned you on? Well welcome to pansexuality. Anyway, it's not that any of this means anything at all at the end of the day. But I'm starting to think that the entire term "pansexuality" is kind of bullshit.

Just sayin'. At least the reviews for "Solo" make the movie look like it's worth watching on opening night, even with its pansexuality confusion.
Posted by Michael Offutt, Phantom Reader at 12:08 AM

Email ThisBlogThis!Share to TwitterShare to FacebookShare to Pinterest
Labels: If I'm interpreting Lando Calrissian's sexuality correctly then the term pansexual may be so broad that everyone on Earth is queer, Lando Calrissian, pansexual, Star Wars