I'm in love with Riverdale's beautiful darkness and suffering. Let me tell you all about it. 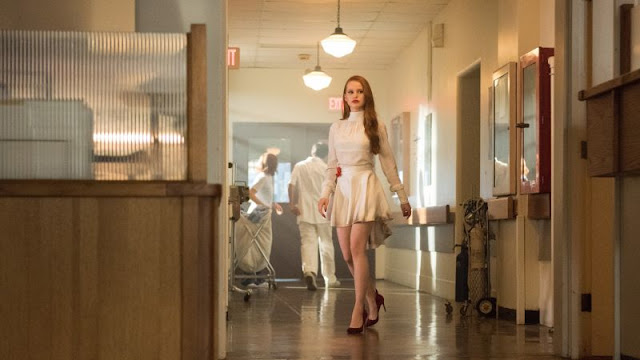 Riverdale is back. I love this show because everyone has a motive for murder. And even if they don't eventually end up dead, it's just enough of a fantasy to buy into. I mean...could there be a whole small town of sex-crazed young (exceptionally gorgeous) people bleeding all over the place as they damage and traumatize one another, while listening to great music and leaving a good looking corpse? Maybe not, but who knows? IT COULD HAPPEN IN EDGY-VILLE.

This year's mystery (last year was Jason Blossom's death) is apparently "Who shot Archie's dad?" Played by Luke Perry, I was legitimately thinking a couple of times that they might just bump him off while watching last night. But they didn't, and I think the series is stronger for making this decision. The bit near the end though where Archie stands vigil over their house with a baseball bat to attack any intruder makes me think that they should have just invested in a home security system. It wouldn't have had the same impact though. And although that scene was very dumb, I got an earlier one where Veronica joins Archie in the shower. In that scene, he's watching blood swirl between his toes and thence down the drain. That scene was as hot and steamy as it was intended to be. But...Veronica did get into the shower while Archie was trying to wash his dad's blood from off his skin so yeah...a little dark but I still liked it. Eh...Veronica is not in the series for her ability to comfort people.

You would be mistaken too if you thought that a simple request for help from the local gang wouldn't produce some good helpings of trauma too. Jughead asks the Serpents to help uncover some information they might have about the possible masked shooter, and it results in a bloodied man being delivered to his trailer. They wanted to make sure their effort did not go unnoticed by Jughead. Makes sense, I suppose, in a psychopathic kinda mindset kinda way. I mean, there'd always be that nagging doubt: did they actually look into it?

Finally, Cheryl was a big winner in the premiere. She puts her mother (who's in the hospital with third degree burns) in her place, even squeezing the oxygen tube so that she's gasping, and then telling her that she's in charge now. Wow, go psychopathic teen. She also had the best line of the night in Fred Andrews' room at the hospital: "You gave me the kiss of life Archie Andrews, now I've given it to your dad."

Oh and Jughead ate a burger in the premiere. It's about time.
Posted by Michael Offutt, Phantom Reader at 6:10 AM

Email ThisBlogThis!Share to TwitterShare to FacebookShare to Pinterest
Labels: I'm in love with Riverdale's beautiful darkness and suffering, Riverdale