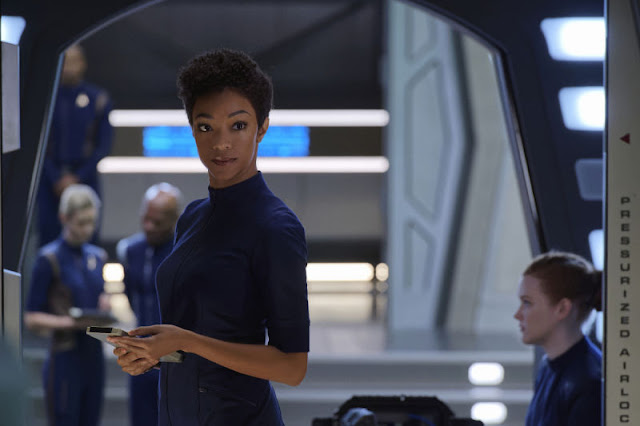 I really don't like Captain Lorca. He's just an awful person, and that trend definitely continues in this week's episode of Star Trek: Discovery. Spoilers are ahead for those of you who haven't watched the episode yet.

Lorca (if you don't recognize his name) is the captain of the most technologically advanced ship in the fleet. Unfortunately, this means that he just can't go off and indulge every whim...or at least that's what he's told by Admiral Cornwell, who shows up long enough for them to squabble, have some sex, and for her to threaten his command when he freaks out and points a phaser (that he apparently sleeps with) at her head. She declares him mentally unfit and leaves, only to get captured by some Klingons. Naturally, Captain Lorca (who embraces the unconventional) is now shrugging this one off. "I'll go if I'm ordered to, but if not we'll just...I dunno...see if she ends up dead." That's not a direct quote, but it's pretty much how this captain's personality is. And I'm kind of disturbed at Burnham's devotion to Lorca, and appreciation to serving him. Ugh. It just makes me want to throw up in my mouth a little bit.

Additionally, this episode really put Sarek under a microscope, and I'm not sure I like how it went about this. We've known since old Trek that Sarek was a stubborn Vulcan. He also disliked Spock's decision to join Starfleet (this is a matter of canon and has been canon for about fifty years). But to think Sarek is the kind of person who would make his own adopted child believe her own inadequacies and failures as a person were responsible for not making it on Vulcan--instead of it being his own emotional decision to choose his own blood--essentially turns him into an asshole.

But things weren't all bad with the episode, and I'm not saying I don't enjoy Discovery...rather, I'm saying I don't enjoy Captain Lorca. Some of the other things I really liked was the idea that "smarts don't count" when it comes to getting a command rank in Starfleet. Burnham points out that everyone who rises to that level is smart. You have to have something extra.

I also liked the idea of Vulcan terrorists. It develops the Vulcans a bit more than the run of the mill logic-obsessed ones that we've seen in the majority of the series. I suppose Kim Katrall could have been considered a kind of terrorist in Star Trek VI: The Undiscovered Country. But really, she was more of a rogue person operating on her own than under any real movement essential to Vulcan culture.

I'm not sure if Ash Tyler is entirely human either (he's the guy that was rescued last week from the Klingon prison). He appears to be completely loyal to Lorca because he lives on the edge and shares some of the captain's personality flaws. The fact that he has similar traits to Lorca though, makes me think that it's just a bad idea having him around. But what if he's a Klingon plant? This seems more likely. I mean, they could have surgery to make a Klingon look human, right?
Posted by Michael Offutt, Phantom Reader at 12:27 AM

Email ThisBlogThis!Share to TwitterShare to FacebookShare to Pinterest
Labels: Star Trek Discovery, The morally bankrupt Captain Lorca threw his admiral bff under the bus in the latest episode of Discovery