Here are five things I expect from Solo: A Star Wars story 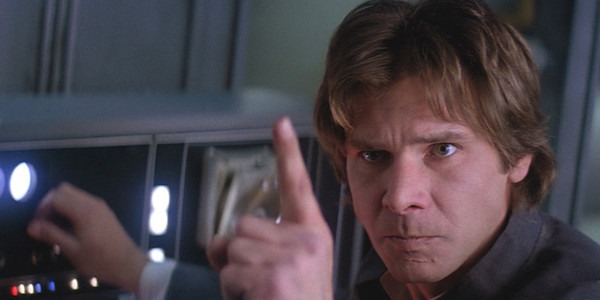 With the announcement by Ron Howard that the Han Solo movie would simply be called "Solo," it got me to thinking about what I actually expect from a movie about the most famous space smuggler there is.

1) I think that we should see some kind of Heist. I mean...what kind of movie would it be if good ole Chewy and Han weren't making money pulling the wool over someone's eyes?

2) Han should be arrogant. He was pretty full of himself in the original Star Wars (as well as a womanizer) so we should see some of this on display.

3) Lando Calrissian. If we don't see a young Lando and Han playing a game of sabaac, I will be incredibly disappointed.

4) We need to see whatever the Kessel Run is, and it needs to be run in twelve parsecs. This needs to be clearly explained as "impossible" in the movie to do (as well).

5) We'll get a meeting between Han and young Jabba. We already caught a glimpse of him in the Star Wars prequels, but this will be better done because technology and C.G.I. has advanced so much since the early 2000's.

Anyone else caring to take a stab at what we'll see when it hits theaters in December of 2018?
Posted by Michael Offutt, Phantom Reader at 12:01 AM