Star Trek Discovery is a dark science fiction take on traditional Trek only with actual cussing and gay characters. 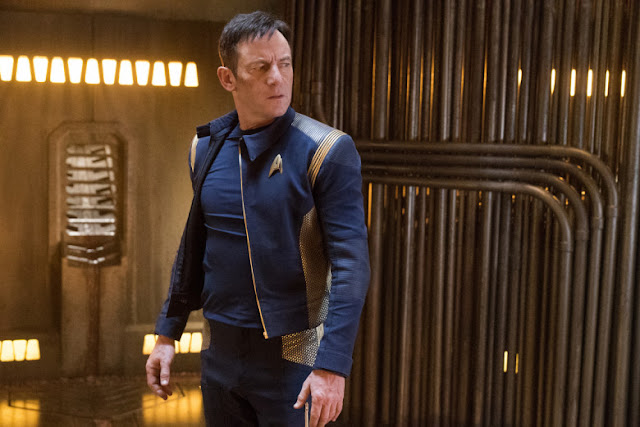 Spoilers Ahead. Please be aware :). Season 1, Episode 5 called "Choose your Pain" was one of the best episodes aired yet, which is to say a lot since this series has got extremely high production values and solid actors. Last night I was caught off guard twice in one episode. For one, the characters dropped the "F" bomb twice. I had to check myself and then realize, hey this is online and a paid subscription at that, so they must feel they can get away with more, and I really like it. Then at the end of the episode, we learned that the doctor and the engineer are a gay couple. I mean...that's just awesome. It's never been a real thing in a Trek show until now. On top of all that, the gay character saved the ship, so yeah he's brilliant and a hero.

But pushing past those two barriers to examine the episode, there was lots to be proud of in the vein of those who like Trek. Roger Carmel's portrayal of Mudd (who we met in the original series) seems to work pretty good. I never really liked the character of Mudd, as he was pretty much an asshole. This new actor carries that role pretty well, reprising the smug trader with no scruples. He says, "I sure as hell understand why the Klingons pushed back, Starfleet arrogance." This probably means that there's more to him than just being a trader in goods. He also has dark political motivations. A possible villain, maybe?

We also learn that Captain Lorca (as if we didn't suspect this already with his commitment to do whatever it takes) is essentially a terrible person. He confesses that he blew up his last command ship so that he could save his crew from the hands of the Klingons. What a way to justify mass murder. The guy's got no moral center whatsoever.

Star Trek: Discovery is just a different kind of show. It's dark and gritty with an over-arching storyline and a kind of Babylon 5 or J.J. Abrams reboot kinda feel to it. I wonder where it's going with all this. Maybe the mirror universe? I kinda got that hint from the episode's last scene. Thing is, the last time we saw the mirror universe, everyone had mustaches and strange goatees. That should still be a thing. It really should.