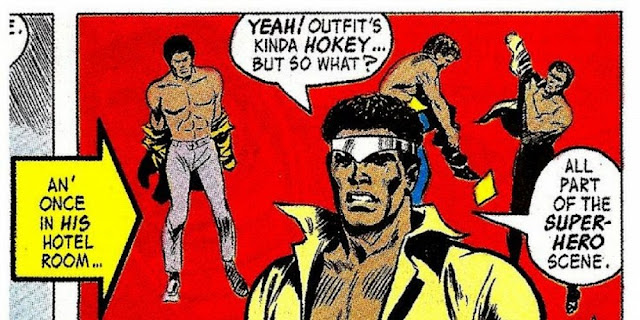 You've probably watched Daredevil on Netflix. If so, will you at least agree with me that Matt Murdock is pretty much a dick to everyone. Jessica isn't much better (as in Jessica Jones). She's snark all day long, and it could really be tiresome hanging around that. Of course, Jessica's baggage comes from her father getting killed and somebody raping her while controlling her mind, but still.... I'm gonna borrow a word from Monday night's debate: temperament. Luke Cage has got good temperament. I like it, and he's the hero that Foggy deserves.

It's obvious too that Claire prefers Luke Cage to Daredevil in the trailer. After all, she's a nurse and probably gets tired of stitching Matt up every other night. Luke Cage is unbreakable. That's a nice if not boring quality to have in a superhero. I just hope that the villain is good. Compared to Kingpin and David Tennant's mind controlling rapist, the bar has been set pretty high.

For those of you who don't know, the dude with the XXL hoodie in the bodega in the trailer below (which Luke Cage trades out for his own) is Method Man, from Wu-Tang Clan. He shows up in lots of movies and was in The Wire.


This Friday is gonna be great. We've got an interesting movie coming out and on top of that,  I can begin binge-watching Luke Cage. I'm so ready to see him punch people like it's no big deal again. I'm calling it right now: this year's lazy Halloween costume will be a "bullet" ridden hoodie.
Posted by Michael Offutt, Phantom Reader at 12:16 AM