A Bones and Sleepy Hollow crossover is happening and I'm mad as hell about it. 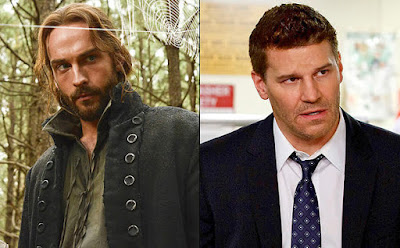 I don't watch the show Bones anymore. It used to be one of my favorites but they killed Vincent Nigel Murray so that he could leave to go play in the doomed SyFy series, Alphas, and I declared myself, "done with this show." In the years since I abandoned it, I'd heard that Boothe and Dr. Brennan got married (yay...glad I missed that) and that Dr. Sweets (a character that I absolutely loved) also got killed off so he could leave for another show. Quite frankly, I'm glad I stopped watching.

So it really pisses me off that Fox is ramrodding a crossover of Sleepy Hollow (one of my favorite supernatural thrillers) with that of Bones. This reeks of desperation to me. Bones is losing viewers by the droves because the story jumped the shark a long time ago and they killed off too many beloved characters and/or had the characters on the show treat them like shit. Dr. Sweets rarely if ever got any kind of respect from the scientists in the show.

But one of the things that I liked about Brennan's character was her atheism, and her level headed-ness in the face of all things supernatural. I remember an episode where a voodoo priest tried to scare her with his curses and she poked him in the eye and said something like, "People aren't so scary when they get poked in the eye." Her belief in things that can be proven was like finding my fictional soul mate. When asked about her beliefs, Dr. Brennan said, "I believe that this coffee is warm because the molecules are racing around in it. I believe that the sun will rise in the morning because it has several billion years to go before its nuclear fuel is depleted" and on and on and on. Dr. Brennan is incredibly grounded in science and a crossover with Sleepy Hollow is going to suggest that Brennan doesn't know everything, which is wrong because SHE PRETTY MUCH DOES KNOW EVERYTHING. Brennan's IQ is off the charts. She's smarter than the crack of Indiana Jones's whip.

So now Abbey and Ichabod are going to cross paths with Boothe and Brennan? Give me a break. Ichabod is 250 years old...this can't/shouldn't exist in Brennan's universe. The first two seasons of Sleepy Hollow were about the Book of Revelations and the Four Horsemen of the Apocalypse which Brennan views as FICTION in the same vein as Harry Potter. It makes for a great story. But mixing these worlds MAKES BRENNAN wrong about everything she believes in. Why does FOX even think that this is a good idea?!

In a week full of outrage, I guess this latest insult from Fox makes me want to ask, "Et tu Fox?" But thanks to Shakespeare, we all know how that ended.
Posted by Michael Offutt, Phantom Reader at 12:34 AM

Email ThisBlogThis!Share to TwitterShare to FacebookShare to Pinterest
Labels: A Bones and Sleepy Hollow crossover is happening and I'm mad as hell about it, Bones, Sleepy Hollow