Why is The Strain's apocalypse so underwhelming when it should be the best thing on television? 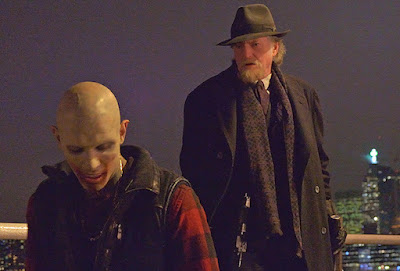 I like pretty much anything science fiction. This weekend I watched Lavalantula and Two Headed Shark Attack. I thought Three Headed Shark Attack was threatening to overdose me on The Asylum's particular brand of terrible movies, so I'll spare you a review. And let's face it, it was all just filler for the normal Sunday night shows that I indulge this time of year: True Detective, Falling Skies (on its last season), and The Strain.

Aside from arguing with my friend Adam over who is the "True Detective" of season two, our other conversations tend to circle around "The Strain." This season, the vampire apocalypse has full on struck New York City. Vampires wander the alleys and streets in packs doing "The Master's" bidding while our would-be group of heroes from season one are cooking up a "strain" of their own that will infect vampires and essentially kill them.

Guillermo del Toro's handiwork is evident in the exploration of vampire biology which ends up being intriguing enough to stick with the show week after week. We are also fed nuggets of information about the vampires. We've learned there is more than one master, and they are not fond of one of their number going rogue. We've learned that Abraham is 94 years old and sustains his youth by turning the vampire worms into a boiled down cocktail that he injects into his eyes to give him the strength of someone thirty to forty years younger. And we've also learned that no one in New York City really seems to care that people are dying everywhere.

This is one of the things that I thought I Am Legend captured so wonderfully in those snippets of all hell breaking lose that we saw through Will Smith's flashbacks. Maybe Fear the Walking Dead (which is supposed to premiere in August) will show how an apocalypse exploding in real time should happen, i.e., widespread panic and people screaming while buildings burn to the ground. Everyone in The Strain just seems so damned calm, and it's weirding me out a bit. "Oh there's a vampire apocalypse? Let's just break into this spa, kill some vamps, and then have sex in the pool." "Oh there's vampires eating people by ejecting six foot snakes from their mouths? No worries, I still need to see your I.D. to get into this place and there's going to be a ribbon cutting ceremony at the new food bank down the street." As far as I can tell, it's business as usual in New York with people going to their jobs and kids attending school. All I can say is...really? Have you not seen the vampires eating your neighbor? Why is traffic on the streets not gridlocked with people trying to get the hell out of New York City?

Anyway, my criticism aside it's not going to make me stop watching. I just am a little flummoxed at this particular representation of an apocalypse.
Posted by Michael Offutt, Phantom Reader at 12:34 AM

Email ThisBlogThis!Share to TwitterShare to FacebookShare to Pinterest
Labels: The Strain, Why is The Strain's apocalypse so underwhelming when it should be the best thing on television