Mr. Robot is probably a figment of Elliot's mind and Tyrell is a combination of everything I liked about Christian Grey and everything I hate about Francis Underwood

I've watched three episodes of Mr. Robot now. Wednesday's episode was called Eps1.2d3bug.mkv, and if you haven't watched any of these, you should probably be warned that the narrator is very unreliable. Elliot's a genius software developer/engineer that regularly uses morphine and other drugs and when filtered through his point of view, his employer simply becomes "Evil Corp" instead of "AllSafe." I get the impression that "Allsafe" is probably some stand-in for "Google" or for "Apple" (the two largest tech companies in the world). As far as I'm able to tell, the hacking and coding seems to be about as close to reality as anything I've ever seen, which doesn't necessarily mean much since I'm no expert. It becomes obvious to me though that USA in this latest series is taking great pains to be as authentic as possible.

Christian Slater is the telltale "Mr. Robot," and I'm pretty sure that just like in "A Beautiful Mind" and in "Fight Club" that this particular character is a figment of Elliot's imagination. His loud comments never get remarked upon, which lend credence to this theory. Mr. Robot has a plan that reminds me a lot of Tyler Durden's. He wants to crash the global financial system by wiping out all debt owed by individuals so that everyone is finally free. It'll be interesting if the series actually follows through with that premise, and it's probably very popular with everyone right now as every country and most citizens seem to be drowning in debt these days.

There's also a villainous bisexual named Tyrell Wellick. He's incredibly handsome (think Jamie Dornan in "Fifty Shades of Grey"), and I'm a little disappointed in this choice. When I see him pick up this guy named Anwar just to slip a bug into his phone, I'm reminded of the "secret homosexual" as a sign of amoral and sexual deviancy from a couple of decades ago. But maybe he just knows how to capitalize on his looks to get what he wants and wields his beauty like a tool. Beyond his sexuality, Tyrell is complex: his wife is pregnant and likes him to tie her up (again like "Fifty Shades of Grey") only it's clear she's in charge. He also pays a homeless guy to allow him to brutally assault him under some train tracks. It's like Tyrell is a complete psychopath in a way, and it oddly seems to fit in what I think of corporate America: that being that only the psychopaths make it all the way to the top to claim the golden chalice of "C.E.O." or otherwise. 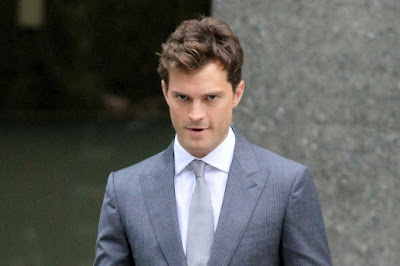 Mr. Robot is a show that I'm probably going to watch on a regular basis. It's characters are just too compelling really for me to let go, and I gotta know if Elliot's imagining everything and what the hell is going on with Tyrell and his wife (who have obviously got one of those "House of Cards" arrangements to support each other ruthlessly). I could imagine the pitch session for the Tyrell character: "He's a combination of Christian Grey and Francis Underwood all rolled into one." How could you go wrong?

Are you watching Mr. Robot?
Posted by Michael Offutt, Phantom Reader at 12:46 AM

Email ThisBlogThis!Share to TwitterShare to FacebookShare to Pinterest
Labels: Christian Grey, Mr. Robot, Mr. Robot is probably a figment of Elliot's mind and Tyrell is a combination of everything I liked about Christian Grey and everything I hate about Francis Underwood