We are three weeks into The Flash on the CW, and it has shattered the CW's ratings records as the most watched series premiere in the network's history. I'm not surprised that it has now been given a full-season order (yay!). Honestly, the trifecta of Flash, Arrow, and Gotham (Fox) is a renaissance for cinematic quality genre TV, and I'm really loving it.

So where are we exactly with The Flash? Well, by the end of the third episode Barry Allen is finally growing comfortable with his powers. He can save someone behind Iris's back while she's on the phone arguing with her boyfriend and be back in time to see if she wants to go get something to eat (even though they already had dinner and a huge bowl of buttered popcorn--what I wouldn't give for that kind of metabolism?)

Barry's world emerged from the first episode as fully realized. It's the objective of what so many of us strive for in our writing, because who hasn't been told at some point or another by an agent that you need to start in the middle of the action and you only have fifteen seconds to grab the attention of your reader (or maybe that's just something literary agents say). Anyway, all of you writers out there know what I mean, and all of you writers know just how hard that is to pull off.

So we have Barry now grown comfortable in his role as the Red Streak. We have Iris who is the obsessive stalker of "The Red Streak" and falling into the role that makes Lois Lane such an interesting character. We have Cisco and Caitlin Snow playing scientists that support Team Flash, and Harrison Wells as (from what I can tell) the ultimate villain of the first season, Reverse Flash or Professor Zoom. This hasn't been confirmed by anyone. It's just what I think.

From little things that Wells has dropped in dialogue, I know he's at least two-hundred years old, has been to the future, knows a hell of a lot about Barry Allen and engineered the accident that created him. Wells also isn't shy about killing people (lots of people if you consider all the meta-humans his experiment created). My guess is that Barry's whole life has been a manipulation by Wells. What I can't piece together is what does he get out of it?

Perhaps Zoom wasn't trying to kill Barry's mother but instead, murder Barry the kid in the pilot episode. Barry stopped that from happening by rescuing his kid self and Zoom took his rage out on Barry's mom? Does that sound plausible? So that would mean that (in the pilot) when we see red and yellow streaking around, the red is in fact Barry from the future trying to stop Professor Zoom from completing his objective, which then leads to Barry's mom being murdered and Barry's dad going to jail for it. That one scene is like a huge time paradox that blows my mind. Because Barry stopped him from completing his objective, Zoom has to create Flash in order to satisfy paradox.

Are you lost yet? 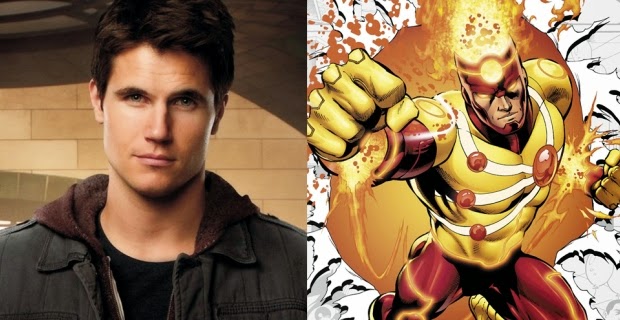 And for Flash fanatics like me, there was another Easter egg planted: we got to see the birth of one part of Firestorm. Ronnie Raymond (in a flashback), who is Caitlin's dead boyfriend, got trapped inside the particle accelerator and had a moment very reminiscent of Dr. Manhattan from The Watchmen. Firestorm (in case you don't know) is also known as "The Nuclear Man." He has the ability to rearrange the atomic and subatomic structure of inorganic matter. In other words, more special effects are incoming. I don't know about you, but when I watch comic book shows, I like to see special effects.

So in conclusion, in last night's episode the Flash got poisoned after Firestorm got born and Harrison Wells is a very bad man. Ayep, and now I'm ready for next week's episode. Hopefully, I will start getting some answers.
Posted by Michael Offutt, Phantom Reader at 12:06 AM

Email ThisBlogThis!Share to TwitterShare to FacebookShare to Pinterest
Labels: the Flash, The Flash got poisoned after Firestorm got born and Harrison Wells is a very bad man