Common Sense is in short supply on the Walking Dead as Bob goes for a walk in the dark woods alone. 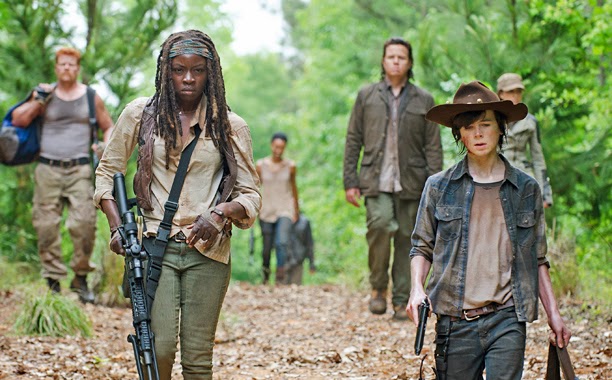 I kind of expected what happened to Bob in last night's episode of The Walking Dead, but I was hoping they wouldn't go there. In the comics, it's Dale that gets his legs amputated and eaten by the Hunters (in a world with no refrigeration a tourniquet is a handy cannibal item). However, Dale died in season two, so that wasn't a possibility. And then there's the whole fact that the guy that threatened baby Judith in the season premiere last week, remains alive. So yeah, Tyrese didn't kill him even though he was hitting him so hard I thought it plausible that the guy wouldn't survive. But did Tyrese know the guy wasn't dead? He stopped Carol from going into the cabin covered in zombie guts, reassuring her that he finished the job. Oy, I just don't know. Needless to say, it's disappointing. In Rick Grimes words to Carl, "You are not safe. You are never safe." And leaving loose ends of the "cannibal" kind will always come back and bite you in the ass.

But "Bob B Que" aside, the title of last night's episode, Strangers, is probably a nod to Father Gabriel, a preacher incapable of protecting himself who has been hiding out in a church, eating what remains of the food drive before the apocalypse started, and apparently the subject of something scrawled on the backside of the church that reads, "You will burn for what you did." Hmm. He did lead the group to the food bank, but the imagery of his arms against the wall in the pool of slime was too much like a guy just accepting his fate in a crucifixion to a walker that we later learned was probably his wife before the apocalypse. I'd be remiss to say that I don't trust Father Gabriel all that much at this point, and this leads me to my next subject: trust (or the lack thereof).

Trust is what makes societies work, and it's probably one of the single elements that has the most impact on a story being considered "dark." We've all seen or read stories where there's violence and death, and there are plenty of examples of such stories that I wouldn't brand as "dark" fiction. Rather, I'd consider them "action" stories or possibly in the "thriller" genre but not "dark." However, when you start to mess with trust, that turns a story away from the sunlight. American Horror Story: Murder House is a masterwork in this respect. The first season eroded all trust that Vivien had for Ben by exposing lie after lie after lie.

By contrast, the world of The Walking Dead is a place where trust is a scarce commodity. Rick and crew decided to trust that Terminus would be a sanctuary for them and instead, it became a slaughterhouse. They escaped, but only because Carol decided to morph into the most badass female heroine of all time, single-handedly assaulting the prison with a zombie army and facilitating the implosion of a place that was a hive of institutional evil. This is the push and pull of this world, and is its most hopeless aspect.

Sigh. Oh Bob, why oh why did you go for a stroll in the dark woods away from the church? The world may never know. It kinda sucks though that I was just starting to like his character.
Posted by Michael Offutt, Phantom Reader at 12:01 AM

Email ThisBlogThis!Share to TwitterShare to FacebookShare to Pinterest
Labels: Common sense is in short supply on the Walking Dead as Bob goes for a walk in the dark woods alone, The Walking Dead