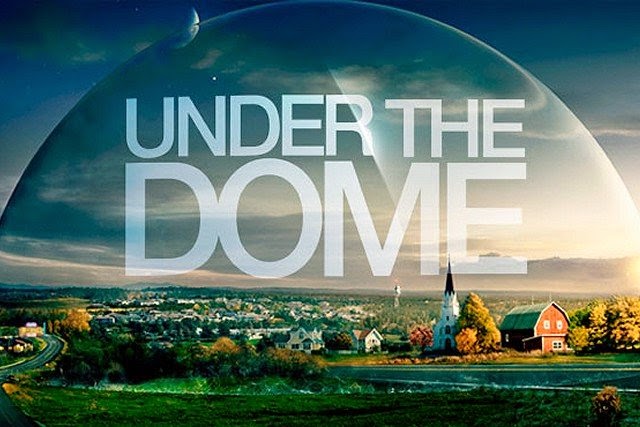 I think Under the Dome, at least for me, has jumped the shark. This television series, which airs on Monday night, continued what has to be some kind of "alien experiment" that started in season one. Now, I haven't read the enormous book that is the source material for this show. But the reason I say it has to be an "alien experiment" is because...well what else could it be? King, who is the mastermind behind the show, has given little to no evidence that there is magic in this world. In fact, it's pretty close to ours, even employing a scientist to explain away events that are occurring "under the dome" from the red rain to the plague of butterflies.

And I suppose that "realization" that it is just aliens screwing around with humans to see how they would react if isolated from others of their kind is just stupid because humans don't act any differently when they aren't under a dome. I know that the whole "shock" is supposed to be at how cruel human beings are to each other. That at the end of the day, the monster you should be fearing is your neighbor. But here's the thing: without any kind of dome humans visit the absolute worst atrocities on one another anyway.

You want examples? Let's look at Chicago, which periodically vies for most violent city in the nation with its many gun shootings and murders. Or let's go out of the U.S. to Mexico and see what drug cartels are doing to people. Or let's go abroad to Syria and look at how the dictator, Assad, treats his people. How about North Korea? Yeah, I'm pretty much sure that cruelty and fear of cruelty is what keeps everyone in line. Ever hear of the Killing Fields? Ever wonder what took place at Auschwitz? What about on the top of an Aztec temple? What happened there? My point is that if aliens needed evidence that humans are cruel, all they had to do was observe the world for a single day.

So what does that leave for aliens to discover about the people living "Under the Dome?" In my opinion: nothing that couldn't be observed anywhere else. In a way, the television show is even more annoying with the dome than it would be without it. The Dome compresses what could be a "meh" moment into busy work, and we as viewers are expected to swallow these "challenges" as a substitute for actual story telling. Here's an example of what I'm talking about: a building has a fire so everyone has to come together to put out the fire because they all live in a dome and there's nowhere to go. Everyone starts running out of food so they've got to figure out how to allocate resources. And on and on and on. Each episode is just the "challenge of the week." You could do this kind of thing forever and keep a series like this going forever, but it's not really stimulating. Here, I'll give it a whirl: someone goes missing and the town folk have got to spend all episode finding said "missing" person. But what to do next week? Oh I know...town folk find "missing person" and they are dead. So now we can have a whole episode on how said person ended up dead.

The first season of this show, I was intrigued. But now, it just drags on and on and is nothing more than the most basic methods of storytelling: cause and effect. I guess that the people that continue to watch Under the Dome either don't expect much from their programming and just want to watch an episodic t.v. show that lurches from crisis to crisis with some kind of eventual "alien" money shot, or they are just die hard fans of Stephen King (which I am not). I guess that's maybe why this show runs in the summer, because there's very little competition for it in its chosen time slot and rather than be bored on a Monday night, I've been tuning in with the hopes that it'd get moving and that eventually I'd like one of the characters.

Ah well. With August here, the fall tv season is just around the corner.
Posted by Michael Offutt, Phantom Reader at 7:09 AM

Email ThisBlogThis!Share to TwitterShare to FacebookShare to Pinterest
Labels: Stephen King, Under the Dome, Under the Dome uses crisis management to lurch from episode to episode and this is just predictable and boring