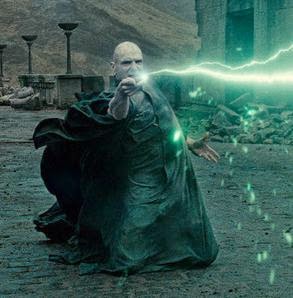 You know that villain that's supposed to be supercool because they are just a complete badass? For me, it wasn't Voldemort, who (quite frankly) would have been better served with a knife or a gun. After all, if you want someone dead, you could be forgiven for thinking that there is anything more lethal than a gun. Even the Winchester brothers knew this in Supernatural, when they found a gun capable of killing God in season two. So below are listed all the times Voldemort used "The Killing Curse" (and feel free to correct me if I'm wrong):

1) When Harry was a baby.
2) In the Goblet of Fire book following Cedric Diggory's death at the graveyard (it didn't work because of something called priori incantatum).
3) When Harry was fighting Voldemort in the Department of Mysteries, he attempted to use the Killing Curse again. It was prevented when Dumbledore arrived and animated a golden statue to cover Harry and shield him from the curse.
4) When Voldemort tried to kill Harry in the Forbidden Forest (Narcissa Malfoy lied to Voldy saying Harry was dead in the hope of being able to be reunited with her son Draco).
5) And again in the final battle where his spell rebounds upon himself, which at this point is just stupid because it sure as hell would have occurred to me that using this particular spell will probably not work since it hasn't worked during the last four times I tried it.

Seriously. How many times do you need to try and do something and it doesn't work and then you just keep trying to do it the same way? Anyway, it's not that I think these books or this story is particularly bad. It's just that I think Voldemort had an IQ of about 80, which means that despite all of his supposed natural talent, he really should have been riding the "short train" to school.

Thoughts? I know all of you "Lovers of Harry Potter" are probably in shock out there that I would dare call J.K. Rowling's penultimate villain "stupid," but get over it. At the end of the day, Voldemort was as dumb as a box of rocks.

Posted by Michael Offutt, Phantom Reader at 5:54 AM

Email ThisBlogThis!Share to TwitterShare to FacebookShare to Pinterest
Labels: Voldemort tried to kill Harry with the Killing Curse at least five times and that's just dumb