Miranda Hardy and Jay Noel want to tell you about Death Knocks. Are you ready? 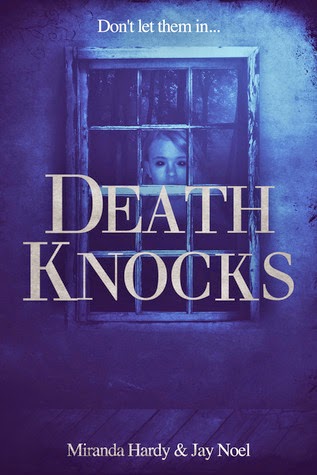 This is the week that Miranda Hardy and Jay Noel are doing their cover reveal for their upcoming young adult paranormal thriller due to be released on September 26th, 2014. What do you think? Pretty creepy, right?

I think I first heard of the phenomenon of the "black-eyed kids" from author Sarah Falen's blog (but don't quote me on that as I did a brief google search for it and can't find it). Sarah writes these posts about strange and weird things happening all around the world. The story I remember (and it could have been from her blog) was about kids knocking on doors and asking to be let in and they're wearing these black contact lenses to try and creep out adults.

Anyway, let the book speak for itself in the following blurb:


Who knew a knock at the door could rupture your entire world? They don’t demand money or possessions…they want much more than that, they want your life.

Maverick is preparing for senior year: he’s no longer stuck in the “friend-zone” with the girl of his dreams, he’s looking forward to choosing the right college and being on his own, and he plans to have a blast along the way.

But a knock on the door changes all of that forever.

Maverick begins a mind-altering, life-changing journey to discover the truth—a truth that certain individuals will do anything to keep hidden.

Death Knocks is a Young Adult paranormal thriller about the strange global phenomenon known as the Black-Eyed Kids. Take a creepy and exciting ride in a world where myth meets reality.

Death Knocks is scheduled for publication on September 26, 2014 by Quixotic Publishing.


I am taking a one week break from blogging. I'll see you again on Monday, July 28th.
Posted by Michael Offutt, Phantom Reader at 8:34 AM