In science fiction news this week, I read that action superstar (and real-life Hulk) Dwayne Johnson is trying to decide between playing either Shazam or Black Adam. So given that I have a special place in my heart for Shazam/Black Adam I thought I'd break this decision down pro/con style beginning with Shazam. 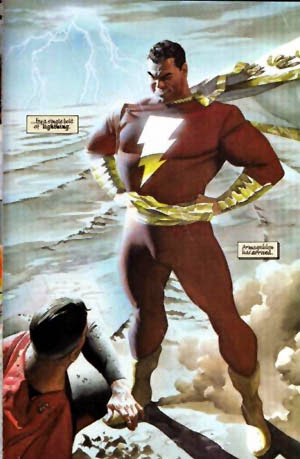 At left is an illustration of Shazam from the iconic "Kingdom Come" graphic novel (which I absolutely loved). Comic star Alex Ross painted the whole thing in glorious color--the book is literally a work of art in and of itself. But the tale revisits the DC universe with veteran superheroes like Wonder Woman, Batman, and Superman, who are all in their older years. However, "older" isn't the same as it applies to humans. These "gods" get stronger with time, so Superman, Wonder Woman, and Shazam/Captain Marvel are at the peak of their game. In this particular panel, Marvel has triumphed over Superman by speaking "Shazam" which summons the lightning magic that transforms him from a mere mortal into a magical being that's just as strong as Superman. In fact, Marvel says the command word multiple times, sidestepping the lightning which rains down on Superman essentially throwing him to the ground (Superman is as vulnerable to magic as he is to kryptonite).

Now, from time to time I get asked (usually by kids) to weigh in on who the most powerful superhero is in any given universe. My "go to" answer is usually "It's really hard to beat Superman..." which usually elicits a surprise because most kids don't get that Superman is so frickin' powerful that it's kind of on its own level of ridiculous. But he is. So when I say that another superhero is as powerful as Superman, that means that character is basically a god.

So yeah, Shazam is basically a god. And its easy to be confused with Shazam because he's also known as Captain Marvel. Captain Marvel is the alter ego of Billy Batson, a boy who by speaking the magic word "Shazam" can transform himself into the being with the combined powers of 1) Solomon 2) Hercules 3) Atlas 4) Zeus 5) Achilles and 6) Mercury. That's how you get the name "Shazam!" You take the first letters of all those gods and put them together as an acronym.

Legally, there have been lawsuits alleging that Shazam is a copy of Superman (there are similarities). Also DC comics renamed the character to Shazam to avoid long-standing trademark conflicts with another character named "Captain Marvel" owned by rival Marvel Comics. So I don't blame you for being confused.

The Pro's for playing this character are plentiful. 1) Shazam has never been portrayed in a movie, so the character would be ready for Dwayne to put his personal imprint on it. 2) The character has a long and storied history rich with great tales (Crisis on the Infinite Earths, Kingdom Come) and is a gateway to the most powerful villains in the DC pantheon, e.g., Darkseid. 3) Shazam is incredibly powerful which means the movie is going to be filled with all kinds of "eye candy" that boys and men love. And Dwayne has a strong loyal following among women so that'll pack the audiences with ladies who like to look at muscular men. 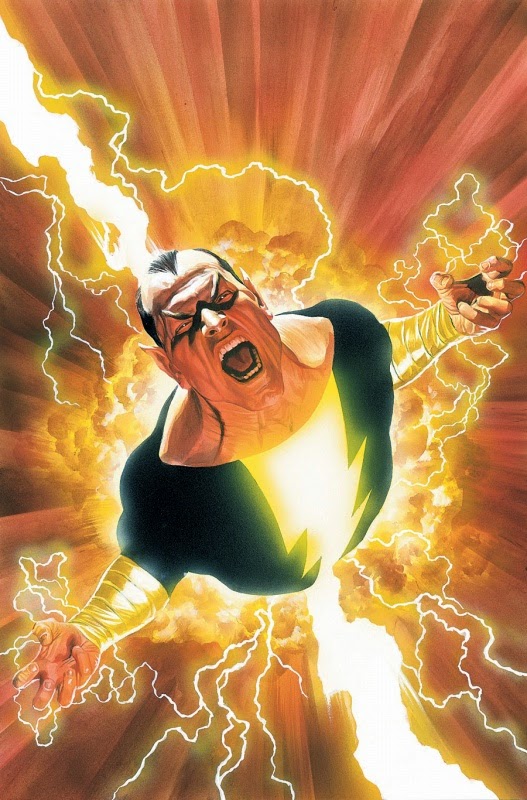 The only con I see for Dwayne in playing this character is that it'll just be him playing another protagonist, which doesn't stretch his acting talent at all. Well, and then there's the fact that DC Comics just don't have the popularity that Marvel has, and Warner Brothers may screw this adaptation up the same as they screwed up Green Lantern. So yeah, there's always that.

Now when Black Adam was originally depicted, he was a corrupted ancient Egyptian predecessor of Captain Marvel who fought his way to modern times to challenge Shazam. But DC redefined the origin to make him an antihero trying to "clear his name."

Black Adam (if memory serves) gets his powers from Shu (stamina), Hershef (strength), Amon (power), Thoth (wisdom), Anpu (speed), and Menthu (courage). I know, it sounds like he's very feng shui but in the DC universe, all of these things translate into "power" and "magic." Of course he has just as much super strength as Superman (able to hold a Boeing 747 aloft full of passengers like it was nothing), so much stamina he doesn't need to eat, sleep, or even breath (he can easily survive in space), he can move at sub-light speeds, fly, has instant access to all languages, has magic resistance against massive amounts of spells, and enough courage to render him resistant to telepathy and mind control of any kind. So yeah, he's basically another god (hence why I use the word "disgusting").

The Pro's for playing this character are 1) anti-heroes are interesting. Vin Diesel proved that by helming the signature character of "Riddick" which was worth three fully funded Hollywood films. 2) Dwayne Johnson would get to tap into his known propensity for all things Egyptian (remember "The Rock" played to great effect the character of the Scorpion King). 3) Dwayne Johnson finally gets to expand his acting repertoire and play someone sinister.

The Cons? Well playing a villain is usually a one-shot deal. And as a bankable star with a following, that seems to be a waste of Dwayne Johnson's talent. But what is a good movie without a great villain? Arguably a mediocre movie. So by hiring talent like Dwayne to play the bad guy, the films bound to be a success.
Posted by Michael Offutt, Phantom Reader at 12:13 AM