Is the Lion and the Rose the ultimate critique on our modern society, our widespread apathy, and the tyrants we fear? 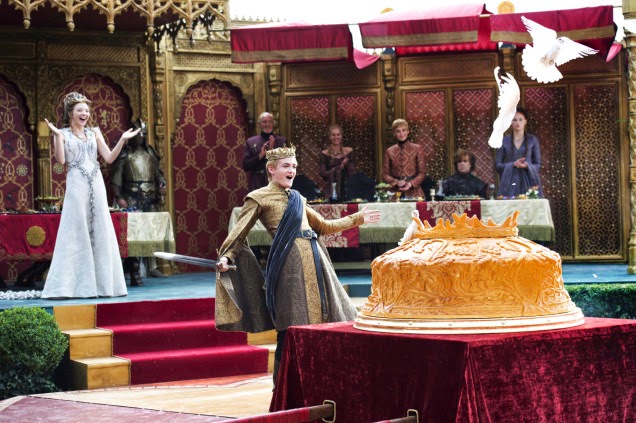 You may have heard of Megan Huntsman in the news. If you haven't, then this is all you need to know: she's a local (Utah) gal who was booked into the Utah County jail on suspicion of killing six of her newborn children over a 10-year period. Seven dead babies were found on April 12, 2014 in a garage at a Pleasant Grove home where Huntsman lived up until 2011.

Is there a lesson to any of this? Not really. Utah captured one monster and this sicko's name is Megan Huntsman. But anyone that thinks a change has happened is just fooling themselves. People saw Megan for years. They never interacted with her; they never said a word even if they thought something suspicious might be going on. It reminds me of stories of girls who get kidnapped and are held in backyards next door to neighbors who ignore what's happening on the other side of the fence.

This "stick your head in the sand and scream LA LA LA" part of our culture won't change because we live in a society that prizes its privacy. People have been raised to detest intrusion; even the American dream consists of a picket fence. This notion of building walls has a purpose: to hedge the "riff raff" out. I've noticed a trend among young people in this area. They are initially outgoing until they meet someone and get into a relationship. From that part forward its all about building walls, separation, and isolation to "couple-only" activities. The wishes of the couple are all filled with dichotomies like "I want to have access to all the things that a city has to offer, but I don't want any of the people around that might tell me what to do or influence my children or possibly covet my partner."

They don't even bother to ask: do any of the things I want run counter-intuitive to each other? Yes it's possible for isolation in a big city, but not without a lot of money to build a house on a double lot to ensure that the neighboring houses aren't staring into your windows, and then put a wall around that house to keep all the undesirables out. Ever drive into a gated community? It's kind of a surreal, sterile experience. It's like driving into a land ruled by the Borg from Star Trek where everyone thinks the same and all yards have one tree, accent lighting, and varying degrees of the same paint job. But most of them (if asked) will tell you how much better life is inside the wall than outside. Otherwise they wouldn't choose to live there, right? Life is better where you don't have to deal with commoners.

Game of Thrones has this same loathsome view that the rich have for the poor in spades. It's funny how access to money makes people think that they are better than other people who don't have money. As I watched the "Purple Wedding" episode of Game of Thrones on Sunday wherein King Joffrey dies, I thought to myself, how can George R.R. Martin's world be so ridiculously cruel yet so real to me? And suddenly I thought of Megan Huntsman, and it all became clear as glass. George is a master observer, and he's merely imbuing these characters with what I'm seeing every day. And most of that is how ugly, petty, and inhuman people are. This episode has so many examples of people being awful that it's hard to cover them all. But, like a good blogger, I'll give it my best shot.

There's Stannis Bartheon. This "would be" king watches as his witch/high priestess Melisandre burns three loyal supporters at the stake (one is his brother-in-law whose only crime is refusing to tear down his altars to the Seven Gods when Stannis orders it). And yes, just like Megan Huntsman, no one says a thing. Everyone just watches it all go down with a kind of "clueless" expression.

Then there's Reek. Reek, a.k.a. Theon Greyjoy, just watches as Ramsay Snow slaughters an innocent girl because she's pretty and made his girlfriend jealous. For the record, Ramsay shot the girl in the leg so that the dogs could rip her pretty face off. I guess she isn't so pretty anymore.

Oh and of course there's Joffrey. How can we not forget the most vile character in the series? Has there ever been anyone more hated and grotesque than this young king? Let's just concentrate on the wrongs that he visited upon everyone in this episode:

1) Joffrey makes a hideous spectacle by humiliating his uncle Tyrion and his wife, Sansa, over and over again. He insults him, pours wine on his head, and makes him his cup-bearer (which Tyrion tries to turn into a compliment) but it isn't. Joffrey makes him bend over to pick up his cup, kicks it under the table, and is just a complete ass. I suppose what may be most shocking is the fact that he's clueless that he's actually so awful. I know people who are exactly like this: completely unaware to the idea that they are chauvinist pigs, jerks, and ignorant. And these aren't old people but young, raised in households that stuck a silver spoon in their mouths and raised them to call "flight attendants" by the name "stewardess" even though that term hasn't been used in twenty years.

2) Joffrey pretends to take an interest in a book that Tyrion's given him for his wedding only to destroy it with his next gift, a Valyrian sword forged from Ned Stark's original weapon. Not only that, but he cracks jokes about beheading Ned Stark over and over again. I suppose cutting a book to ribbons isn't so far-fetched these days. There's plenty of people in our society now who view reading as a chore and would like nothing better than to see books burned.

3) Joffrey throws things at minstrels, gives people money to be cruel to his fool, and then hires five little people to impersonate himself and other kings to recreate the murder of Robb Stark. It's all calculated to insult Sansa and Tyrion to the max. This kind of behavior is called bullying, and I see it every day.

When Joffrey died, the internet the world over celebrated. In a way, it reminded me of how the world celebrated when Osama Bin Laden died. I think that's where George is at his most brilliant and his most real. George recognizes that the world is filled with tyrants and that there are very few people who ever stand up to these tyrants. Most of us are guilty of allowing them to go about their business, doing awful things, because our lives are too busy or too valuable to get involved in stopping so much evil. Maybe when Melisandre of Ashai said, "The world we live in now is the real hell" she was not just uttering a line, but taking a cue from the master himself and showing us what George R.R. Martin really thinks of this world. Perhaps The Lion and the Rose is the ultimate critique on our modern society, our widespread apathy, and the tyrants we fear.
Posted by Michael Offutt, Phantom Reader at 7:19 AM

Email ThisBlogThis!Share to TwitterShare to FacebookShare to Pinterest
Labels: Game of Thrones, Is the Lion and the Rose the ultimate critique on our modern society our widespread apathy and the tyrants we fear, Joffrey Baratheon