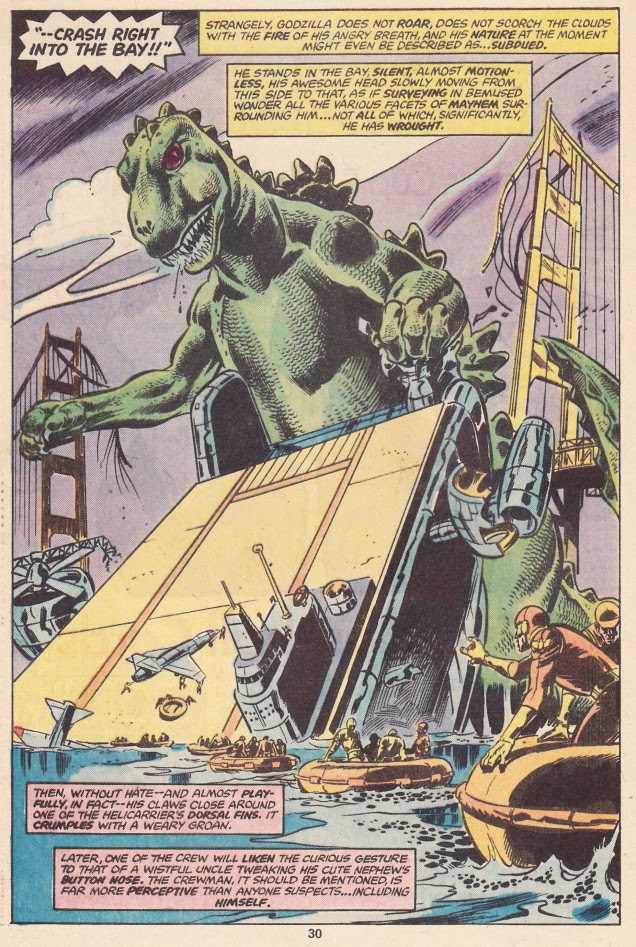 I'll just get right to the point: there's a new extended trailer out for Godzilla (due out next month) and you should watch it to prove you're not a complete dullard. Most of the footage in it seems to be new. I don't know if you're one of the people that's following this like I am (I am my own particular brand of crazy), but it is pretty exciting. At around the 2:15 mark there's a glimpse of what looks like a new kaiju through the window of a train. And when Bryan Cranston seals his wife into a contaminated area of the plant they're both working at there's a pink/lavender mist that looks really ominous and has nothing to do with supporting breast cancer. I kept asking myself "What is it?" which is probably what I'm supposed to be asking. But when I ask questions like that I just produce even more questions:

1) Is the Godzilla in this movie going to be some kind of angry god? Or will he be Earth's protector and champion like Toho later evolved him into?

2) What are these new kaijus? Are they enemies of Godzilla? Do they have cool powers?

3) Is anyone else tired of the Golden Gate Bridge getting trashed?

5) Is the plant featured in the film (that has a nuclear accident) Fukushima? Are they really going to go there? That probably means either the Japanese are going to love this film, or they're going to hate it. There won't be any middling "feels" here. The last time Americans made a Godzilla film, the Japanese put out one of their own (in short order) that featured the Godzilla from the Mathew Broderick film. It got its ass kicked by the real Godzilla in under ten seconds. I'm not kidding.

The film coming out next month has the awesome potential to be a really huge deal because it has a solid cast, a good story, and effects that are impressing the hell out of me. And by solid story, the writing seems to "frame" history in clever context. Take (for example) these particular talking points (and yes I know I've used up my allotted ration of bullets):

1) All those nuclear tests that we did in the Pacific? The public was told they were tests...but what was really happening is that the army was trying to kill something huge.

2) And if that is Fukushima going up (with the purple mist that kills Cranston's wife) then the earthquake that started it all may have been caused by Godzilla. How cool is that? Or uncool if you don't like the idea that a huge fire-breathing lizard thing is responsible for the deaths of thousands of people.

Either way, I like it when writers get clever with history. It feeds into my "conspiracy theory" gene that for the most part remains dormant. I'll even go so far as to say this: aspiring writers could take a few cues from the inventiveness in Godzilla because clever is the new black. As I edit my own manuscript this week, I'll be thinking of ways I can frame historical context or scientific observation to make sense of the weirdness in my stories.
Posted by Michael Offutt, Phantom Reader at 12:24 AM

Email ThisBlogThis!Share to TwitterShare to FacebookShare to Pinterest
Labels: Aspiring writers could take a few cues from the inventiveness of Godzilla because clever is the new black, Godzilla, Kaiju