If there is insecurity in my writing, it's that the things that I like to read or watch broach subjects so hard-hitting and in ways that are so real, that I doubt my own abilities to recreate the same. I think I'll never be able to evoke this kind of emotion. Take dark fiction as an example. Everyone knows that I'm a fan, especially when it comes to science fiction that takes on a horror twist. When I'm engrossed in these kinds of stories, inevitably I compare them to my own works. The little voice inside pipes up and says, "Your stuff is boring compared to this." Maybe it's just an uncomfortable truth; I guess only a lifetime of writing will give me the perspective to answer this to my liking. 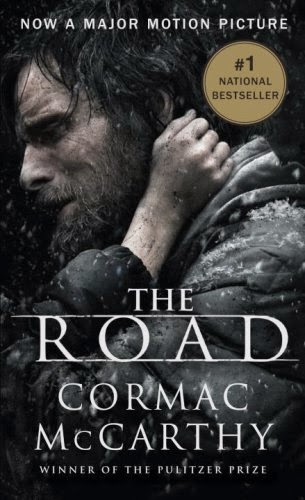 Cormac McCarthy published The Road in 2006. It's a post-apocalyptic story where a father and his young son (over a period of several months) cross a landscape languishing in the fall of civilization. It won the Pulitzer Prize for Fiction in 2007. In thinking of the blasted environs of The Road I am reminded of the sardonic voice of Tyrion Lannister in George R.R. Martin's magnum opus, A Clash of Kings. Tyrion at one point turns to his "beloved" sister Cersei and says, “A day will come when you think yourself safe and happy, and suddenly your joy will turn to ashes in your mouth, and you'll know the debt is paid."

In The Road, there is no debt to pay unless it is to the unnamed sins of the survivors who are ambiguous in the insistence that they are the good guys. The land is ashes, it is devoid of living animals and vegetation, and many of the remaining human survivors are cannibals, scavenging the detritus of city and country for flesh to eat. The horrors they face include seeing a newborn infant roasted on a spit and captives being gradually harvested for food.

This is the kind of darkness that has come to The Walking Dead whether by caveat that it was always this way and we were in denial, or whether it was driven in this direction because it is exhausting its ability to continually shock the audience. In either case by the close of season four Rick, Michonne, his young son Carl, and the other survivors reached "the end of the line" at Terminus, are now imprisoned in a rail car painted with an "A" (by what we can presume are cannibals), and are in a heap of trouble.

Is it disturbing how effectively Scott Gimple has been able to build attachment in these characters? Disturbing, yes but also brilliant. It's hard for me to not squirm in my seat. The creepiness of Terminus makes the Governor look tame. I can only imagine that next season will probably be a grotesque blood bath, with amputations being done via tourniquet because the world has no refrigeration. In other words, the living monsters are alive while they eat you (and probably discussing the day's business and how much they miss Facebook). The hints have been strong, from the constant barbecuing of meat when there are no animals around, to what looks like a slaughter pit filled with the bloody skeletal remains of butchered humans (shown only briefly on screen), and the strange foreshadowing of the rabbit trap.

And what about previous episodes? Remember this painting? Contrast it with the appearance of Mary, the woman we met at Terminus played by Denise Crosby, a.k.a. Tasha Yar from Star Trek: The Next Generation. 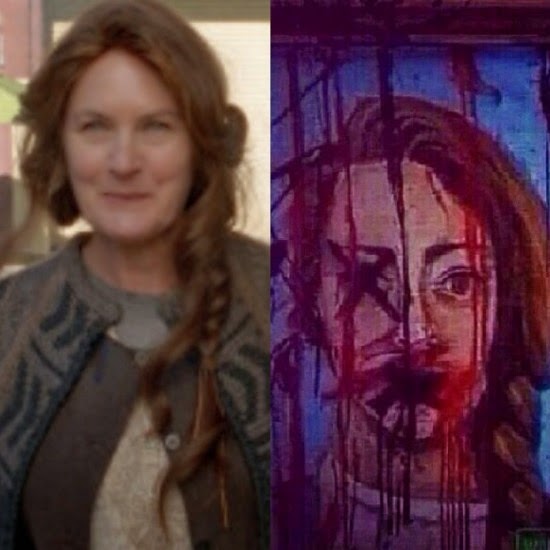 The image (posted on Reddit) suggests that Michonne and Carl were in this lady's house. Take a look at the hair, the layers of clothing, and remember the bloodbath in the nursery. There was also a picture of a dog on the wall that looks eerily similar to the dog that distracted Daryl and led to Beth's kidnapping.
The theme for this season's The Walking Dead has pretty much been "internal monsters." It isn't too much of a stretch to imagine that the food on Mary's barbecue is human (probably Beth's and that makes me sad). Unfortunately, these events also parallel those that occur in The Walking Dead comic book, a.k.a. the appearance of "The Hunters" that I mentioned in a post last week. This leads me to the next question: what is it about cannibalism that we find so terrifying? Perhaps it's the idea of being someone else's food, and that we can imagine those around us adopting this lifestyle were times to get tough. Yes, you read that last line right. Your neighbors are perfectly capable of eating you if they were starving.

According to a new poll from the Society for Progressive Meat, I learned that 10% of Americans would consider eating humans while a measly 3% would consider going all vegan. 2,500 respondents were polled over a two-week period. Interesting eh? Admittedly, this poll was commissioned by an organization associated with efforts to introduce human meat to the mainstream. So there's no doubt that the members of this society get their buddies to drive up the numbers similar to how bloggers get their followers to do the same on goodreads (should I be disturbed that there's a society devoted to cannibalism?) But the study does seem to point to an unsettling fact: many of us could become monsters if the situation warranted it.

I suppose it shouldn't surprise me that The Walking Dead is exploring this last human taboo. It's arguably one of the components that led Forbes to declare the season finale "the most watched hour ever." Zombies have been chomping down on humans through four seasons now, so why should it be any different when those humans are actually alive? For me it has to do with the horror of a reality check in which there is no sanctuary at all in a society that utterly collapses. Without some measure of trust, society is impossible. After all, how can you trust anyone who could possibly view you as dinner?

I've got to hand it to the likes of The Walking Dead. The story (in my opinion) is part of a select group of fiction I label "the best in the business." Can something be so good that it actually discourages you in your own ambitions? I think so.

This post is part of the Insecure Writer's Support Group collective. Go HERE to find out more.
Posted by Michael Offutt, Phantom Reader at 6:48 AM