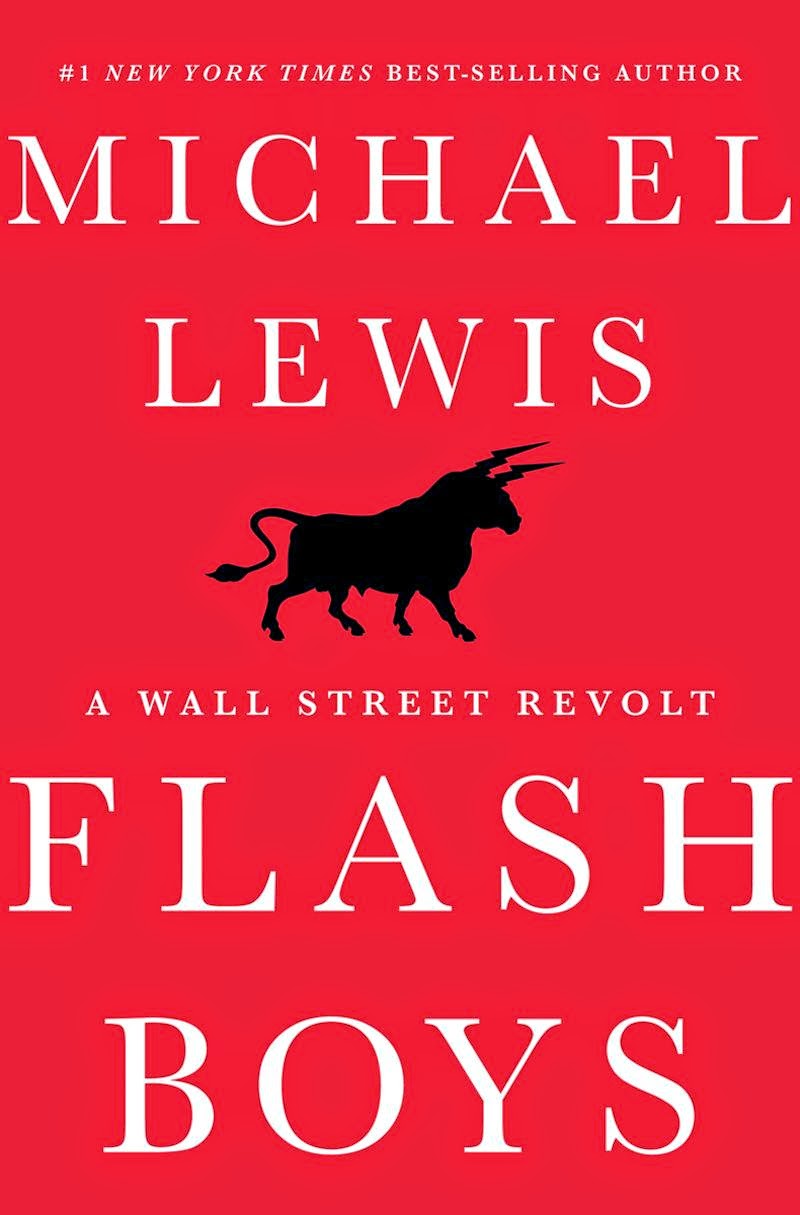 It's amazing how quickly technology changed how Americans do business. I had assumed prior to picking up Flash Boys: A Wall Street Revolt by Michael Lewis, that computers had taken over trading with algorithms going back to at least year 2000. However, the change was more recent than that. It happened in and around 2007-2008. Mr. Lewis conjured an image of a trading floor full of screaming brokers slamming telephones along with a hysteria-infused ticker tape like you see in the movie Trading Places, and all of that ended less than a decade ago. It's now pretty quiet at the exchanges and much of what gets done happens in secretive black boxes.

The New York Stock exchange and the Nasdaq are two "for profit" businesses that provide a platform for the buying and selling of stock. Because they are "for profit", high frequency traders have been able to get an edge on everyone else. One company (calling itself Spread Network and under stealth conditions reminiscent of Cold War espionage) built an absolutely straight tunnel to run fiber-optic cable through the mountains of Pennsylvania. This involved drilling, getting permission from every small town along the way, making sure that no one ever figured out what the tunnel was for, and spending hundreds of millions of dollars. When completed, Spread Network sold access to their "cable" for $14 million each...access that gave a .00008 second advantage on the buying and selling of stock.

What does this mean? Well with the right algorithm (and they did have the right algorithm) a high-frequency trader could identify a big order coming in from say Pershing Square (hedge fund controlled by Bill Ackman) for scooping up a million shares of a company, buy all that available stock on the open market a micro-second before the order hit, and then turn around and resell those stocks to Pershing for more money because they were no longer available.

If you don't understand how this works imagine this: you are at a supermarket and there are a limited number of bananas on the shelf (as there always are) and you need to buy some. As you reach for the bananas, someone pushes you out of the way, buys all the bananas, and then offers to resell them to you for five cents more.

Is this at all capitalism? Is this what America is about these days? Or is this just highway robbery?
There are two camps of thought on this subject and they've been raging ever since Michael Lewis' book came out earlier this week (I started reading it on Monday).

The first train of thought goes like this: It is capitalism because high-frequency traders provide liquidity to the market. Additionally, Spread Network paid to have the tunnel built and the exchanges (which are "for profit" businesses) gave their blessing, and if you wanted to they would do the same for you (the only problem being that the average Joe like you and me doesn't have hundreds of millions of dollars to spend on a cable).

The second train of thought (mine) goes like this: These people are crooks. They are pirates and need to be stopped. Forcefully making yourself a middleman in a two entity transaction is criminal. Sure, these high-frequency traders are making a very small margin of profit per share, but the thing is, when mutual fund managers of 401K's and retirement plans are moving assets around that total billions of dollars, these mosquitoes ravage the common person's money (essentially adding hidden fees on top of what you're already getting screwed out of by taxes and regular fees). In other words: it's bullshit.

It's going to be interesting to see the fallout from this book and whether or not the heroes, one is named Bradley Katsuyama, are vindicated or vilified for daring to come out and say that the markets are rigged (high-frequency traders have been attacking him publicly ever since the release of the book). For me, Katsuyama is a hero, pointing out what I'd suspected about Wall Street but never had any proof. I'm not a day trader but a long-term investor, so the impact on what I do personally is minimal (outside of my retirement plan). But because my retirement plan is getting bigger and more significant, it pisses me off that these swarming insects will scalp further profit from a pile of money that should rightfully be mine.

Consider this fact: In early 2013, one of the largest high-frequency traders, Virtu Financial, publicly boasted that in five and a half years of trading it had experienced just one day when it hadn't made money. Goldman Sachs and Morgan Stanley can't do this, so how is HFT even allowed to happen? The more I think about it, the more it really starts to make my blood boil.

Do any of you have an opinion? Or has apathy at how unfair life is finally taken its toll and beaten you into the ground? I look forward to reading your comments.
Posted by Michael Offutt, Phantom Reader at 7:44 AM