Can Jesse Pinkman build a better box? How will the greatest show on television end? 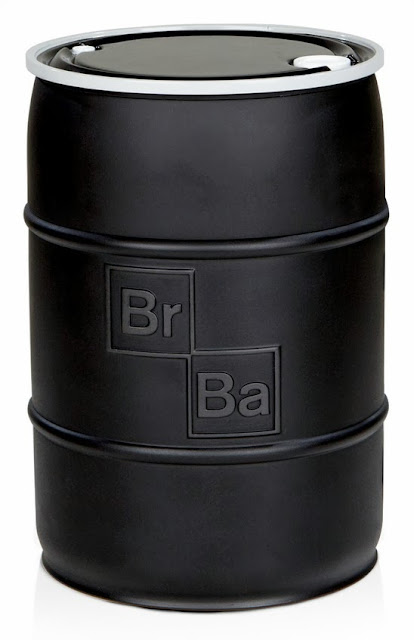 How will I feel when Breaking Bad finally ends next week? I know I'll be sad, but I think there'll also be some relief. These last few episodes have been hard to watch. Walt's whole family has been swept away by the outreaching effects of being a serial killing drug kingpin, and the one person that he loves the most, his son "Flynn" a.k.a. Walt Jr., absolutely hates him.

So it's been a long journey, but the series finale is now upon us. In fact, Bryan Cranston teased that fans should prepare themselves for a "holocaust" when he chatted with Ryan Seacrest on the red carpet at the Emmy's (as a side note: why does the whole world now revolve around Ryan Seacrest?) I'm also happy that Anna Gunn (who plays Skylar White) won an Emmy for Best Supporting Actress. She deserves it. Just watch her performance in last week's magnificently chilling "Ozymandias." I don't think I've ever talked about an episode so much. Why? There was a lot to say regarding the phone conversation. And well, it's shocking to think that Hank is dead. "You are the smartest guy I know," Hank said to Walter, "and you can't see that he made his mind up ten minutes ago." What a way to go.

So what will happen next week? Walt was all set to turn himself into the police when he saw his old pals at Gray Matter (the company he helped found) basically eliminating all of his significant contributions during an interview with Charlie Rose. And this made Walt very angry. When Walt argued with Gretchen in season one he said, "It was my hard work. My research. And you and Elliott made millions off it." Walter has always felt that his work was stolen from him and bitterly blames Elliot and Gretchen for his lot in life. And here's the thing: we never found out what made Walt suddenly leave Gray Matter Technologies and sell his stake in the company for peanuts.

I expect Gray Matter to come full circle in the series finale. Perhaps Elliot and Gretchen will get poisoned by the ricin? Or maybe, we will come to understand a deeper connection between Madrigal (the company which Lydia works for) and Gray Matter.

The title of the last episode is "Felina." This is an anagram for "Finale." It's also the feminine version of the word "feline" in Spanish. I think this is a nod to Lydia who has captured the eye of Todd. Jesse deserves some payback so killing Lydia in front of Todd would be awesome. However, Vince Gilligan in the show "Talking Bad" dropped one clue near the end. He said that "woodworking" had to do with the season finale.

Here's an interesting quote from earlier in the series. It comes from Jesse Pinkman, and it's about woodworking from the episode "kafkaesque":


"I took this vo-tech class in high school, woodworking. I took a lot of vo-tech classes, because it was just big jerk-off, but this one time I had this teacher by the name of... Mr... Mr. Pike. I guess he was like a Marine or something before he got old. He was hard hearing. My project for his class was to make this wooden box. You know, like a small, just like a... like a box, you know, to put stuff in. So I wanted to get the thing done as fast as possible. I figured I could cut classes for the rest of the semester and he couldn't flunk me as long as I, you know, made the thing. So I finished it in a couple days. And it looked pretty lame, but it worked. You know, for putting in or whatnot. So when I showed it to Mr. Pike for my grade, he looked at it and said: "Is that the best you can do?" At first I thought to myself "Hell yeah, bitch. Now give me a D and shut up so I can go blaze one with my boys." I don't know. Maybe it was the way he said it, but... it was like he wasn't exactly saying it sucked. He was just asking me honestly, "Is that all you got?" And for some reason, I thought to myself: "Yeah, man, I can do better." So I started from scratch. I made another, then another. And by the end of the semester, by like box number five, I had built this thing. You should have seen it. It was insane. I mean, I built it out of Peruvian walnut with inlaid zebrawood. It was fitted with pegas, no screws. I sanded it for days, until it was smooth as glass. Then I rubbed all the wood with tung oil so it was rich and dark. It even smelled good. You know, you put nose in it and breathed in, it was... it was perfect."

So the question in my mind is this: is cooking meth the best you can do Jesse Pinkman? No, I don't think it is. I think Jesse's going to use chemistry to destroy Todd and his family. He's going to create a "better box." Wouldn't that be interesting? He's at his best when his loved ones are threatened, and I think he's ready to die himself to make sure that the deed gets done.

A Reddit user pointed out, the word broken into three syllables spells out Fe-Li-Na, which equals Iron-Lithium-Sodium. The show at its most basic is about chemistry, and Walter White says in season one that chemistry is about "transformation." We know Mr. White is armed to the teeth now, so I think he'll go down in a blaze of glory against the people that he hates the most. Whatever happens, it's sure to be a bloodbath.

I'm thoroughly surprised at the saturation of Breaking Bad in the dialogue of Americans. Mad Money's Jim Cramer referred to it last week in his opening discussion on stocks. George R.R. Martin said that after watching the "Ozymandias" episode, "there's no one in Westeros that's as bad as Walter White. I need to fix that."

Do you have any predictions for the end of Breaking Bad? How will the greatest show on television end? I'm on pins and needles here and Sunday seems so very far away.
Posted by Michael Offutt, Phantom Reader at 12:01 AM

Email ThisBlogThis!Share to TwitterShare to FacebookShare to Pinterest
Labels: Breaking Bad, Can Jesse Pinkman Build a Better Box, Felina, Granite State, How will the greatest show on television end, woodworking in breaking bad