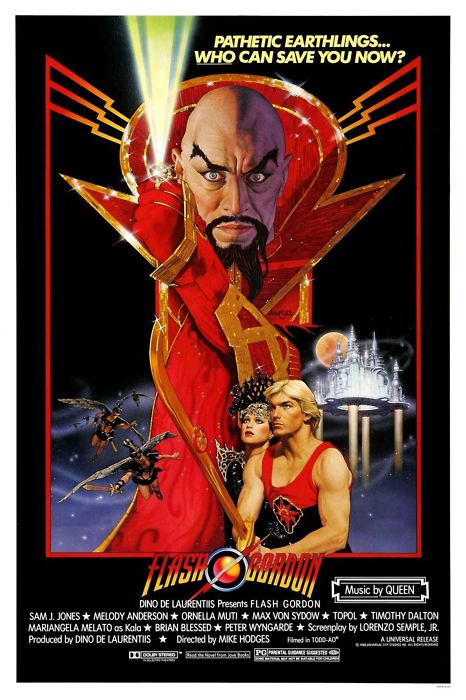 Flash Gordon is quite possibly the most under-appreciated science fiction film of the last 40 years. Disagree? Hear my argument, dear reader because I have six reasons to back up my claim.  Let us start with the first one (which has to do with the writing--a thing for which most of you can relate). For one, "Flash Gordon" features the best megalomaniac dialogue ever written. Here are just a few examples:

Ming the Merciless:  "Klytus I'm bored. What plaything can you offer me today?"

Klytus: "An obscure body in the SK-System, your majesty. The inhabitants refer to it as the planet...Earth."

Ming: "How peaceful it looks." (Ming begins to rain total destruction on the planet with natural disasters)

Klytus: "Most effective, your majesty. Will you destroy this, uh, Earth?

Ming: "Later, I like to play with things a while...before annihilation."

And it gets better than that:

Princess Aura to Emperor Ming: "Water is leaking from her eyes."

General Kala (played by Mariangela Melato): "What do you mean...Flash Gordon approaching?"

Soldier: "On a hawkman rocket cycle. Should I inform his majesty?"

General Kala: "Imbecile! The emperor would shoot you for interrupting his wedding. Open fire! All weapons, now! CHARGE the lightning field! I take personal responsibility in the Emperor's name!"
And in the wedding, let us not forget the exchange of vows:

Zogi, the High Priest: "Do you, Ming the Merciless, Ruler of the Universe, take this Earthling Dale Arden, to be your Empress of the Hour?"

The Emperor Ming: "Of the hour, yes."

Zogi, the High Priest: "Do you promise to use her as you will?"

Zogi, the High Priest: "Not to blast her into space?"
[Ming glares at Zogi]

Zogi, the High Priest: "Uh, until such time as you grow weary of her."

But if this incredibly cheesy, yet TOTALLY AWESOME dialogue is not enough to persuade you to look up this old movie and watch it for yourself, here are reasons two through six:

2) Max Von Sydow or James Earl Jones? To this day I have no idea who has a better voice. Is it Max Von Sydow or does James Earl Jones top him? I can't imagine what it would be like to have both actors in an animated flick lending their voice talents to characters on opposing sides. I think it would be incredible, and Disney should get right on this.

3) Ornella Muti. This Asian vixen played the sluttiest character to grace speculative fiction since Jane Fonda in Barbarella. Who doesn't love a great slut? And for the record, Ornella did it better. They really should have dropped the rating on Flash Gordon lower and let Ornella breathe true life into the role of Ming the Merciless's daughter.
4) The totally gay costumes. I love re-watching Flash Gordon, because it's gayer than The Rocky Horror Picture Show (and that is quite the accomplishment). Seriously, the hawkmen with their shaved legs, the villains all wearing colorful robes splashed with glitter, and the gratuitous flaunting of hunky Flash Gordon's bare chest. But when he isn't running around like that, he's wearing a skin-tight uniform and super shiny rubber boots straight from Frederick's of Hollywood. Elton John and Lady Gaga would totally find themselves at home in a Flash Gordon movie. As a matter of fact, you probably wouldn't even notice them.
5) Queen. Yes, they got Queen to do the soundtrack. If this isn't the checkmate reason to see this film, I don't know what is. True fans of Freddie Mercury know that this band had the undeniable perfect sound for Flash Gordon.
6) A Flying City. They are all over the place in speculative fiction stories and novels, but this and Cloud City from Star Wars are the only ones I can remember in film. The moons of Mongo are really cool. And I was kind of sad when the city got blasted by Klytus' warship. And to be fair, Star Wars' Cloud City is done waaay better.

So what about you? Can you think of any under-appreciated science fiction films? Are you also a fan of Flash Gordon? Have a great Monday :)
Posted by Michael Offutt, Phantom Reader at 12:07 AM