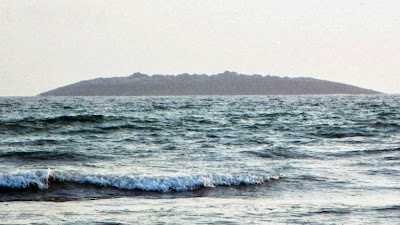 Yesterday, a deadly earthquake in Pakistan caused an island to rise from the sea. Now, I don't mean to make light of such a tragedy by drawing a connection to fiction, but I can't help but think of Cthulhu and his home/prison of R'lyeh.
For those of you who aren't familiar with the Cthulhu mythos, R'lyeh is a fictional lost city that first appeared in the H.P. Lovecraft short story "The Call of Cthulhu," first published in Weird Tales in 1928. According to Lovecraft's short story, R'lyeh is a sunken city in the Pacific that makes its appearance for one day every thousand years or so.

Here's how Lovecraft describes it:


The nightmare corpse-city of R'lyeh...was built in measureless eons behind history by the vast, loathsome shapes that seeped down from the stars. There lay great Cthulhu and his hordes, hidden in green slimy vaults.

Norwegian sailor Gustaf Johansen, the narrator of one of the tales in the short story, describes the accidental discovery of the city as a coastline of mingled mud, ooze, and weedy Cyclopean masonry which can be nothing less than the tangible substance of earth's supreme terror--the nightmare corpse-city of R'lyeh... loathsomely redolent of spheres and dimensions apart from ours.

TL;DR: An island rose out of the sea, and I instantly thought of Cthulhu. It's eerie how fiction can sometimes show up in one form or another in real life. Crazy, right?
Posted by Michael Offutt, Phantom Reader at 7:20 AM

Email ThisBlogThis!Share to TwitterShare to FacebookShare to Pinterest
Labels: An island rose out of the sea and I instantly thought of Cthulhu, Cthulhu, R'Lyeh