If I channel David Sedaris maybe I can understand 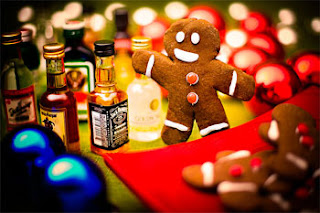 If I channel David Sedaris, maybe I can understand why some people do the things that they do. I can finally understand why we have sales opening on Thanksgiving or why people get mad at saying Xmas when the entire notion of punching someone in the face under a banner that reads "Christmas" to get an LED television that's 70% off, isn't any better.

Or any more in the spirit of "Christmas."

Maybe I can understand why a critic would choose to "criticize" when they haven't actually read the thing their critiquing. People say all kinds of things about the Affordable Care Act. But when I ask them if they've visited Healthcare.gov to read it, they say no. They don't have the time. But they critique it nonetheless.

Maybe I could understand why, even if I put on an elf hat and a green suit and stood next to a candy cane in a shopping mall, I wouldn't be an elf. I'd just be a creepy fat guy in a green suit. And I'd understand Christmas even less. Elves don't get Christmas. Elves were invented by department stores to sell stuff. That's the only reason they exist.

People will say, "that's not Christmas, that's just people being nasty." But you're wrong. You can stick your head in the sand if you want to.  It is Christmas. The holiday is totally that, and it gets worse every year. Democrats have been called socialists. I always wondered what a socialist looked like.  So what does a capitalist look like? Well, capitalists look like the day after Thanksgiving in a Wal-Mart store. That's Christmas, and you can hear the cash register bell ringing like a sleigh bell with a ho ho ho. Half the people will buy things that come with instructions. They won't read them. Instead they'll leave bad reviews on Amazon.

"I write and don't read," one of them might say.

"A critique of your book. I give it 2 stars because I just can't bring myself to give it 1.5."

"How generous of you.  Is there more?  I'm curious what you didn't like?"

"You mean Jordan.  It's Jordan Pendragon," I say. "His name is in there hundreds of times."

"And I didn't like how you pulled off the time travel parts," expert critic adds.

"Actually this is the worst time travel book I've ever read. And why do you refer to hockey as ice hockey?" opinioned person asks.

"Because in America we have field hockey. I want to make sure people who aren't Canadian know the difference. And there's no time travel in my book."

*Snorts. "Why did you market this book as time travel? Jason Pendragon uses too many drugs. Kids don't use drugs. You should write that instead. And they don't have sex either.  What an unbelievable book."

"His name is Jordan. It's not Jason. You didn't read the book, did you?"

"I can't say I'll read any more. Saga of Jason Pendragon doesn't interest me. Lucky it was a free book. 1.5 stars. Too many other books to read."

Yeah, so maybe I could understand if I channeled David Sedaris. Or maybe not. Or maybe some people are just jerks who don't read anymore because they're too busy writing.
Posted by Michael Offutt, Phantom Reader at 12:09 AM

Email ThisBlogThis!Share to TwitterShare to FacebookShare to Pinterest
Labels: Criticism, If I channel David Sedaris maybe I can understand