The politics of revenge in a zombie apocalypse 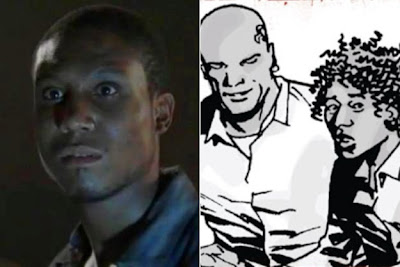 SPOILER ALERT -- This blog post discusses season 3, episode 4 entitled "The Killer Within" from "The Walking Dead."

In the image above is Andrew from Season 3 of The Walking Dead and from the comic book of the same name. Those of you who have followed my blog for some time know I periodically like to talk about story elements present within the shows that I watch. Aside from being another nail-biting episode, upon finishing, I had questions about the moral nature of man and the idea of screwing over your fellow man in a zombie apocalypse for no good reason.

Primarily...what I wanted to know is why?

Screwing over your fellow man has never really made sense to me in any science fiction drama that features terrible creatures that will eat you. Burke did it in the movie Aliens and when I watch the movie, I still wonder why. Was Burke insane? Did he not see what the alien xenomorph did to humans. It has got to be one of the most gruesome fates ever imagined.

A zombie apocalypse isn't much better.

With Andrew, he had to run for his life from Rick after his nefarious plot (along with inmate Tomas) was exposed and they tried to kill Rick. Rick chased him to a zombie infested yard where Rick slammed the door shut on Andrew. The last thing we heard were Andrew's chilling screams.

Well, we learned Sunday night that Andrew survived without getting bit and somehow made it to a safe place where the zombies couldn't get to him. Now, if that were me (and trust me...there'd be long odds that I could ever survive one day in a zombie apocalypse) I would count my lucky stars, use the skills that I have to obviously survive multiple zombies, and go into the wild and look for a place where I could find food and shelter away from people that want to kill me. Perhaps I could find another group of survivors that could take me in if I showed them that I could be a good person with valuable survival skills.

But this isn't what Andrew does. He gets back into the prison with the intent to screw over Rick and his crew. Doesn't he realize that each time he encounters the zombies that he is risking his life? Why would you ever do that given that the zombies could kill you and the people you are screwing over can kill you? I would be terrified of both. And he literally gets an entire herd of zombies all riled up by blasting the alarm at the prison. This can only end one way.

So why would a person do that? And does it seem just a little unbelievable? Like maybe they needed to establish that the character was a lunatic before going down this road? Or do you think it's perfectly reasonable that a man on his own (that should feel lucky just to be alive in such a cruel world) would turn from thoughts of survival and focus on those of revenge against people who failed to kill him?

I look forward to finding out what you think regarding revenge in settings where the stakes for your very survival are extremely high to begin with, much less inviting wrath from another front.
Posted by Michael Offutt, Phantom Reader at 12:05 AM