What Wonder Woman Can Teach Us About Writing

This post is totally relevant to writing. I promise. It's not just about boys that may have grown up watching Wonder Woman, owning an Easy-Bake oven, or playing with a Barbie Dreamboat.

It has nothing to do with that at all.

Forget the news on Bahrain, forget the news about the economy, or the global food shortage, mass fish deaths, or even...God forbid...Borders declaring bankruptcy.  Yes, my colleagues...there is something more important. A new Wonder Woman series is about to be launched and for the first-time in 30-years, we have someone attempting to fill Lynda Carter's shoes!  All I know about this "someone" is that she's on a show called Friday Night Lights.  Is it any good?  Sadly, I've no idea.

My big question is...can she do it? In order to be objective about this, I'm going to look at what Wonder Woman has given to us writers and leave it up to you. 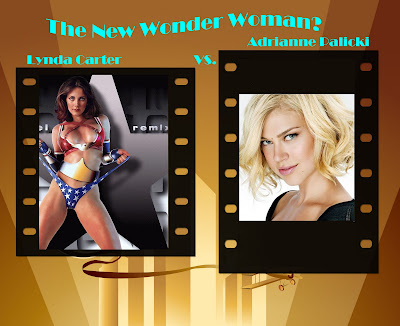 What she gave us: 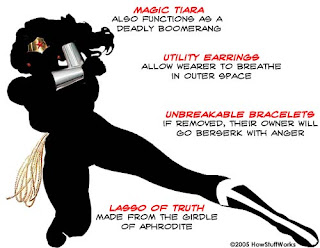 1) She taught writers that magic powers were really awesome. She also showed that if we could somehow link magical items to mythology that this was even cooler.  If you ever use magic items in your stories...you should totally link them to a mythology. Doing so only adds to your street cred because there is totally someone out there that will think it's real. Of course, they may also think that leprechauns, the devil, and unicorns are real too.

2) She showed us that if your novel is bloated with words, all you got to do is strip away some fluff and BAM! Inside is waiting this voluptious manuscript just waiting to explode.  And think of all the trees you'll save! Honestly, if some of the people I rub elbows with in the online fiction community were to print out their books, entire forests would die. :( <== sadface

3) She taught us that once you have an idea, you should run with it.  She also showed the world that a hero could completely be taken seriously by Americans as long as they wore red, white, and blue underwear. She also showed young famous people that you could sprint and not flop out. In Wonder Woman's world, there is no excuse for a wardrobe malfunction.

4) She showed us to deflect the negative comments of naysayers and people who think we suck. Or to persevere in the hail of bullets peppering us from a lack of any kind of validation from friends or family.

5) She taught us to shoot for the stars.  If we missed, then at least we could put stars on our underpants.  Then if anything, we'd still be popular with the gays and shoe-tapping Republicans in airport restrooms.

6) She showed us that our drab manuscript in the hands of a skilled editor and a little spin is a HOUSE ON FIRE BABY! Or maybe a ball of fire...or a ball of light.  It woulda been cool if that thing would have made scorch marks. Basically though, transformation from drab to kapow is inside all of us.

7) She showed us that the best marketing wasn't really Twitter, blogging, or Facebook.  It was just being so damn cool that they put your face on a frickin' lunchbox. Once you appear on a lunchbox...you've made it. This kind of fame totally validates you to join the ranks of "arrogant" author who condescends on others and seeks praise for their genius.

So do you think the new girl can fill Lynda Carter's shoes?

I'll give her the benefit of the doubt and reserve judgement until the end of the first season.

Have a great President's Day weekend.  I'll be back on Monday with more posts.
Posted by Michael Offutt, Phantom Reader at 2:03 AM