If dogs were really this cool; I'd probably get one. :))
I've been watching Supernatural a lot lately.  Much of what they show is based on actual things that people believe to be true in our very real and tangible world (Disclaimer:  I don't believe the stuff as I'm atheist but I know plenty that do).
In the episode I saw last night, a leprechaun played by the same actor that played the doctor in Star Trek Voyager told Dean that he could get Sam's soul back from the cage in Hell.  Of course, Dean doesn't make deals with monsters.  To distract the leprechaun while he performed the "reverse incantation" that would banish the leprechaun and his troop of fairies, he spilled a jar of salt.  As the legend goes...no matter how powerful the fairy, if you spill salt or sugar in front of them, they must immediately stop what they are doing and count every grain.  It was funny watching him pull aside each grain on the floor..."one, two, three..." he started to say, grumbling all the while as Dean sent him back to wherever it is he came from. 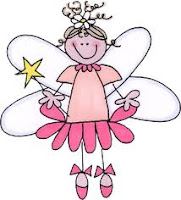 So...do you think fairies would make good writers?  I read all the time on author blogs at how rewriting and editing are a neverending process.  Personally, I think that there is an end and I've reached it several times but I know others are way more obsessed than I regarding absolute perfection.  I'd probably not be a good fairy...I'd only estimate the spilt salt and not count every grain. Oooh...and the metaphor can go even further than that.  Agents and editors are the ones that spill the salt in front of you, forcing you to count the whole thing again.

Are you obsessed with perfection when it comes to your writing?  And, if you answer yes to the question, does it cause you stress?
Posted by Michael Offutt, Phantom Reader at 9:21 AM