Do You Use the Word "Dystopian" To Describe Your Novel?

Well you wouldn't be alone.  Just in my travels on the internet, I see this term pop up A LOT. When I first encountered it, I was reading the "about me" section of a well-known blogger who also writes.  She was a young adult author, so I just assumed that "dystopian" was a self-described term for "young adult fiction" and didn't really give it much thought beyond that.  But by the time I penned this blog, I'd seen it at least ten times on other writing blogs.  It's also mentioned on several publisher sites, so it must be an industry standard.  Either that, or people just in on the "know".


/shrug.  It wouldn't be the first time I missed out on something.


To test out the term, I actually have a few young adult friends and I used the word on them hoping to see their eyes light up with excitement and phrases like "ooo I love everything dystopian."  However, that's not what I got.


"Dystopian?" they replied with a curious look.  "--What the hell is that?" 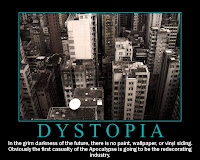 I would answer, "Authors are using it to describe work that they write for you."


"Oh...strange, I guess.  The last book I read was Harry Potter. Who has time to read?"


Hmm.  Okay, so here I'm, an adult...and I'd only the faintest inkling as to what the word meant.  I had a thought that maybe it was the opposite of "utopia" which is sometimes used to describe Salt Lake City by many of its residents, as this is essentially "Zion" to them.  Okay...so then I'm thinking that the people using this word are writing a novel that is the opposite of how many Salt Lakers would regard their city (relate to what you know right?).  So a "dystopia" then is a place where you'd have gun control, lots of social services, good public transportation, a lack of churches, gay marriage, and a society that read books that weren't recommended by the LDS church.  Gotcha.  I think I've an idea of what dystopia means.


But still unsatisfied, I took a look at Wikipedia.  Here's what I found.


Dystopias usually extrapolate elements of contemporary society and function as a warning against some modern trend, often the threat of oppressive regimes in one form or another. Many utopias can be seen as dystopias in regard to their treatment of the issues of justice, freedom and happiness. Samuel Butler's Erewhon (I've no idea what this book is) can be seen as a dystopia because of the way ill people are treated as criminals, but as far as the people 'living' in his novel they are in a utopia. The main point of a dystopia is to make people think about the world in which they live and to see how the idea of happiness can be damaged providing the members of society know little else.


To my surprise I also discovered Ecotopias.  And this has nothing to do with ghostly ectoplasm.


A subgenre of this is ecotopian fiction, where the author posits either a utopian or dystopian world revolving around environmental conservation or destruction.  The novel The Bridge (1973) by D. Keith Mano presents a world dominated by a global environmental fascism, where the government ultimately promotes the extinction of the human race by enforced mass suicide, so as to 'save' the environment.

Another important subgenre is feminist utopias and the overlapping category of feminist science fiction. Writer Sally Miller Gearhart calls this sort of fiction political: it contrasts the present world with an idealized society, criticizes contemporary values and conditions, sees men or masculine systems as the major cause of social and political problems (e.g. war), and presents women as equal to or superior to men, having ownership over their reproductive functions. A common solution to gender oppression or social ills in feminist utopian fiction is to remove men, either showing isolated all-female societies as in Charlotte Perkins Gilman's Herland, or societies where men have died out or been replaced, as in Joanna Russ's A Few Things I Know About Whileaway, where "the poisonous binary gender" has died off. Marge Piercy's novel Woman on the Edge of Time keeps human biology, but removes pregnancy and childbirth from the gender equation by resorting to artificial wombs, while allowing both women and men the nurturing experience of breastfeeding.
So out of curiosity, is your young adult novel a dystopia?  And why do you think writing a dystopia is the way to go for young adults when they don't even know what the term means?
Posted by Michael Offutt, Phantom Reader at 8:29 AM