So I found out what the Darkhold actually is and I'm going to share my knowledge with you. 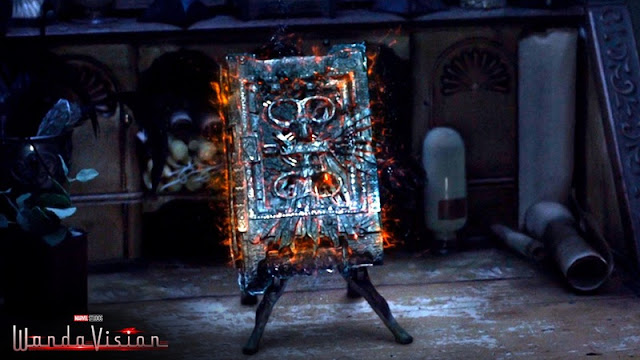 So, at the end of WandaVision, we saw a couple of cut scenes. The most significant of the cut scenes reveals that the Scarlet Witch (Wanda Maximoff) has kind of split herself into two beings. The first one is in a cabin drinking coffee or tea and relaxing with a wilderness view of a lake, and the other is in the bedroom levitating and absorbing the knowledge of a book called The Darkhold. I knew nothing about The Darkhold. However, my friend James (who is more into comic books than me) sent me a video link on Facebook that told me a little about what The Darkhold is, and in many respects, listening to it is a clue as to what may be coming in the Marvel cinematic universe (the MCU).

So, what is The Darkhold? Well, it's a book written on flesh (of course it's a book written on human flesh) that is all about an Elder God called Chthon. Chthon was spawned from this concept called the Demiurge, which was the creator of the Earth in the Marvel universe. Most of the elder gods went evil, but there were a couple that didn't. Gaia was one and she asked the Demiurge to allow her to give birth to a child who was literally "the god eater." Well this child took care of most of the bothersome evil elder gods, but Chthon escaped the god eater by hiding in another dimension.

Being exiled from earth didn't mean that Chthon was comfortable in his new home, and so he's always wanted to find a way back from his dimension. This Chthon left behind a book that contained all his knowledge of how to manipulate chaos magic to do all kinds of dark and powerful things (a spellbook), and it was called The Darkhold. It is an artifact of great power that teaches magic users how to do incredibly powerful things, but it's one purpose is to take over the person reading the book and use their power to either further the aims of Chthon, or to outright free him of his imprisonment.

Many years later, Morgan Le Fay and a coven of witches tried to summon and control Chthon, but the entity ended up being too powerful. So Morgan Le Fay imprisoned Chthon under Wundagore Mountain, where it's been ever since. So, at the end of WandaVision, it's not a stretch to think that the Scarlet Witch has gone to a cabin on Wundagore Mountain. In the comic books too, she and her brother Quicksilver were born on Wundagore Mountain (their father was Magneto), although I guess that's been retconned in some other story. I'm not sure what the canon explanation of that happens to be.

Anyway, The Darkhold seems to be a prop that is closely and intimately associated with this powerful and evil elder god named Chthon. The maker of the video indicates that if we thought Thanos was bad, then Chthon is way worse. However, I'm not so sure they can top what Thanos was (as a villain) in the MCU. I mean...they spent twenty some odd movies slow-burning Thanos and when he finally got his moment to shine, he killed off half the universe and destroyed the Avengers. We literally had to wait a year for another satisfying resolution to the events of Avengers: Infinity War. So, having experienced all of that, I'm not sure I can buy into the fact that Chthon is worse than Thanos, except (maybe) that Chthon is universe ending as opposed to half the universe ending as a threat level. It all becomes kind of silly when framed that way, but in fictional narratives and comic books, there is always going to be a need to "outdo" what has come before, right? I just don't know if Thanos can be outdone. But, maybe I just don't possess the imagination to see it, which is why I don't work for Disney.

I do, however, appreciate that the comic books have at least tried to detail what exactly The Darkhold is rather than just saying, "It's a book of spells." Books need to contain things, and it can be too easy to just create a bunch of mysterious covers and then expect people to make up what is supposedly behind those covers. This is kind of how I feel about The Necronomicon. We don't really know what that book is or why it exists other than it contains the rambling mumbo jumbo of a mad Arab and is somehow related to the Cthulhu mythos. Are its pages filled with spells? Does it have cooking recipes? What do those spells do? The Darkhold by contrast seems to have more answers within the comic book lore. For one, we know it exists because it was created specifically by a powerful elder god to bring him back to earth. And two, it has spells in it that manipulate chaos magic to produce dark and evil effects that (assumedly) people are oblivious that they can do with their chaos magic. It also has a full chapter dedicated to the myth of "The Scarlet Witch," which is very useful because there's a character running around with that title. Finally, its chapters on dark matter (a thing that is name-dropped a lot in the physics world) lend a psuedo-sciency lore to everything so that they can create a plausible suspension of disbelief among those of us who know nothing of real-world physics but like to pretend we are not stupid (many of us including myself are in fact stupid in actual physics).

I am looking forward to more development of The Darkhold and the Scarlet Witch's character in the MCU. Being a book, inevitably Doctor Strange is going to weigh in on it with his expertise, and it's probably a nice teaser for the next Doctor Strange movie and in what direction it may go.

Email ThisBlogThis!Share to TwitterShare to FacebookShare to Pinterest
Labels: So I found out what the Darkhold actually is and I'm going to share my knowledge with you, The Darkhold, WandaVision