Conclave of Shadows by Raymond E. Feist is a clever retelling of The Count of Monte Cristo. 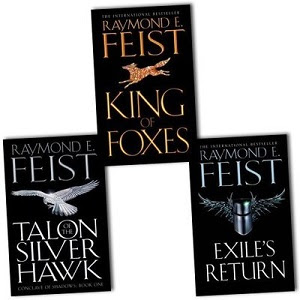 I've been reading Raymond E. Feist's Conclave of Shadows trilogy. I'm in the second book, called King of Foxes, but something was bugging me as I was reading this clever yarn told in a fantasy world. And then I figured it out: it's a retelling of The Count of Monte Cristo by Alexandre Dumas. Most of you out there are probably familiar with The Count of Monte Cristo. It's a fascinating tale wherein a man is wronged and sets out to avenge himself against those who falsely imprisoned him. The way in which he does this is a fascinating story with a Rube Goldbergian level of intricacy designed to bring ruin upon his enemies. While in prison he becomes super educated, being fortunate enough to make friends with a monk who essentially knows everything, and then he fakes his own death when his monk friend dies (so that he can be thrown out with the body bag). Along the way, he picks up a super loyal and very skilled follower named Jacopo (a former pirate), and then they get lots of funding via a fabulous pirate horde, and then the main character is reborn as the Count of Monte Cristo in order to ingratiate himself to the nobility of Paris, which becomes the perfect place for him to slow cook his revenge. How could you not like this story?
What Feist has done in his Conclave of Shadows trilogy is displace this story into the fantasy world of most of his novels (called Midkemia). There, a boy named Talon of the Silver Hawk is not imprisoned per se (like The Count of Monte Cristo character), however, he is reborn when his village is annihilated by some callous nobles who found his people to be "in the way" of their geographical goals. Left for dead, he is revived by members of a powerful and secret society with super deep pockets (think endless money) who educate him in all the same ways as Edmond Dantes goes through in The Count of Monte Cristo. He becomes a superb fencer, learns several different languages, and is firmly ensconced in a city called Roldem, which is just a city a stand-in for medieval Paris. The Conclave of Shadows gave this young man a new identity, calling him Tal Hawkins, and he is a new noble having come from the West. He promptly makes a name for himself by winning the Master's Sword Tournament (a very prestigious title), and he beds lots of noble women who find him very attractive. And then he gets a man servant who is an assassin, named Amafi, who is as loyal as Jacopo ever was to Edmond Dantes. Of course, he trains this agent of his to be his valet while he moves the pieces on the board to plot his revenge.
The revenge element begins with young Tal Hawkins attracting the eye (and thusly being recruited by) the very noble who was responsible for his village's death. And Tal doesn't just want to kill this duke. No, he wants to humiliate him, to bring about his ruin so that as/when the duke dies, he knows exactly why this is happening and who it is that is bringing about his ruin. And just like in the Count of Monte Cristo, his method of taking down his enemies by understanding their character and circumstances and bringing them to utter ruin through a few carefully chosen actions is incredible to witness. It really is a delight to read seeing as 1) I'm familiar with the story, and 2) it is one of my favorites, and 3) the sleight "magical" elements in the book change it up enough to heighten the tension in odd ways.
I'm actually quite surprised to see a fantasy novel mine classical literature like The Count of Monte Cristo. The main themes of revenge, love, culpability, greed, and ambition are all there, and they are treated in a way that does not allow easy answers. And it's a novel where the main character, this Tal Hawkins, is quite likeable not only because he is good, but because he is also evil. He is both the hero and the villain of the story, and that's just really interesting.
Posted by Michael Offutt, Phantom Reader at 12:01 AM