I wonder if AMC even realizes that The Walking Dead has jumped the shark? 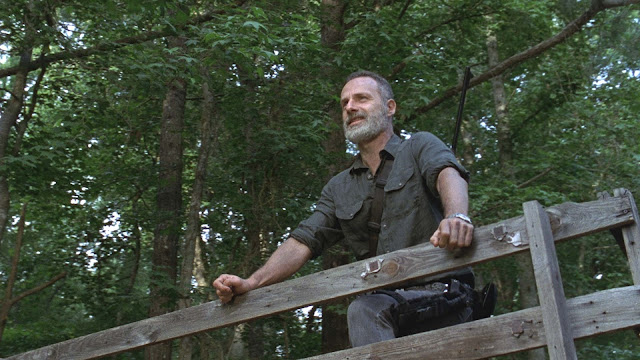 My interest in The Walking Dead has really declined. The fact that this is Rick's last season also may have something to do with it, but I think franchise fatigue (for many) is starting to set in. For one, the show seems to have run out of ideas. The next villains in line after the Saviors are called The Whisperers, and these are just crazy people who walk around in the skin suits made from zombie flesh so that they can exist simultaneously inside huge herds. Just think of the earlier episodes where people used zombie guts to keep the undead from noticing them, and you've figured it out. Second, the show just experienced its worst ratings, which is telling in and of itself. It's weird that Norman Reedus has been signed to a huge contract with the creators of the show saying that this thing could go on for another ten years and could also transition into movies.

In a way, they seem tone deaf to a quintessential part of The Walking Dead: without Rick to bookend the story, and after killing off Carl last season, the show as a piece of mythology is pointless. It shows that the show isn’t actually about anything. It's essentially "stream of consciousness" where each episode is just a story of someone's life until it isn't about that life anymore because they died. I mean...it's really no better than reality tv only with zombies without its bookends. I may watch the remainder of the episodes in this season, but I seriously don't know how this show is supposed to remain interesting with the only plot points being 1) zombies exist, 2) We can build medieval technology like windmills, and 3) there's always some psychotic asshole that tears everything down making us vulnerable to number 1.

It's also weird that they publicized Andrew Lincoln leaving the show. He's gone as of episode five, so everyone has kind of "checked out" of this thing. I figure he gets killed by either zombies or a villain in a zombie skin-suit (read "Whisperer" above).

We live in a strange time for storytelling. Steven Spielberg has remarked that film makers these days don't seem to want to tell a story with a beginning, a middle, and an end. The new model appears to be this: make season after season until people are so bored with it that they stop caring.  I prefer the model where you have a story, no filler stuff, and it has a clear beginning and an end.  Then again, I am not entirely sure I’d think the same if I was a TV exec.  Those guys live in a world where money is the one thing that matters, and if it was my job, who’s to say I would be any different?

Money kind of ruins everything that's good. However, as a caveat, I think that it would be hard to let go of something that (not too long ago) was the highest rated show in its time slot. I respect Game of Thrones so much more than The Walking Dead, because it has an actual end, and no amount of money is going to change that. The entertainment industry could use a long moment to reflect on itself and find some integrity like in Game of Thrones.
Posted by Michael Offutt, Phantom Reader at 12:09 AM

Email ThisBlogThis!Share to TwitterShare to FacebookShare to Pinterest
Labels: I wonder if AMC even realizes that The Walking Dead has jumped the shark, The Walking Dead